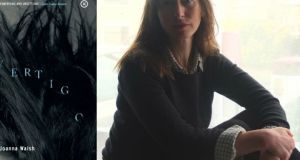 We saw it under the road, in a ditch beneath the road that stretched under the road from one side to the other. The road was not really a road; it was more of a path. The path was so narrow that it was more of a bridge. The ditch under the bridge was so shallow that perhaps it was only a hollow. The snake was in the hollow, thick and black as a bicycle tyre. We could not see its beginning, we could not see its end.

Its head was hidden in some grass or a hole on one side of the hollow, and its tail was hidden in a hole or some grass at the other side. The path stretched over the hollow, and it stretched over the snake. There were four of us. We were all together. We could not decide which was the front end of the snake, and which was the back.

6 ‘Horrendously out of proportion’: Residents set against 19-storey apartments

7 Covid-19: International travel may not be possible by Christmas – Varadkar

9 ‘I think my husband has a drug problem, but he says that’s nonsense’

10 Gordon D’Arcy: Irish lineout has to move past mess of 2020 for the Six Nations

16 Kathy Sheridan: Pandemic is reminder of poison in British and Irish politics

22 Ministers optimistic Leaving Cert exams will go ahead this year

26 Range Rover Sport D350: Fab to drive. But everyone you pass will hate you

27 Seán Moran: When GAA players were shyer about being the retiring type

29 Coronavirus: What happens when the lockdown ends in March?

31 Michael Harding: Just after Christmas, I began talking to the birds

32 Q&A: What are the new Covid travel rules and how will they work?