The Beatles Lyrics: The Unseen Story Behind Their Music, by Hunter Davies

Even fans who think they know it all already will treasure this forensic exploration of the Beatles’ songs, writes Paul Howard 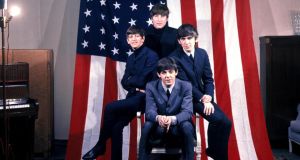 Here’s an interesting fact. The period of time between John Lennon and Paul McCartney writing the ultimate 1960s bubblegum-pop hit, I Wanna Hold Your Hand, and sitting down to collaborate on their crowning masterpiece, A Day in the Life, is the same length of time that One Direction have been a band.

All great artists develop over time. But, in the case of The Beatles, the metamorphosis happened so quickly that it’s almost impossible to believe now that the two men who knocked out formulaic pop songs, with simple rhymes and even simpler sentiments, became, in just four years and a handful of months, the most admired and studied songwriters in the history of popular music.

Capturing the speed of that transformation – from early-1960s boy band to the group that revolutionised the way we listen to music today – is one of the many achievements of The Beatles Lyrics: The Unseen Story Behind Their Music, a handsome coffee-table book by Hunter Davies that manages to shed new light on the creative process behind such songs as Eleanor Rigby, Across the Universe and Lucy in the Sky With Diamonds.

The work of the Beatles has been analysed, even overintellectualised, to the point where you can’t imagine there’s very much of value that remains to be said. Musicologists have dissected every melody, examined every chord and investigated every crochet and quaver. The secrets of the band’s studio trickery are so well known that “serious” Beatles fans can tell you which band member played which note on which instrument in which song.

The lyrics, in comparison, have been neglected – or at least that was the contention of Davies, the band’s original biographer, who, back in the 1960s, enjoyed more access to The Beatles than any other journalist.

He notes in the book’s introduction that the diorama of cardboard-cutout heroes on the cover of Sgt Pepper’s Lonely Hearts Club Band featured nine writers, including Lewis Carroll, Dylan Thomas, HG Wells and George Bernard Shaw, but only three musicians, one of whom, Bob Dylan, was celebrated more for his lyrics than for his music.

It’s a measure of the importance that the band placed on the written word. So if you’re looking for an original way to retell the story of the world’s most written-about pop group, what better way to do it than through their handwritten lyrics?

Davies set himself the task of tracking down the original versions of as many Beatles songs as he could. He managed to lay his hands on more than 100, an impressive tally given that they were scattered all over the world, in the ownership of museums, libraries, universities, old friends of the band and wealthy private collectors who didn’t want their identities revealed. Then there was the issue of copyright, a tricky enough obstacle when you remember that McCartney is required to pay a fee every time he performs Yesterday in public.

The result of these endeavours is a treasure of a book, a forensic, song-by-song exploration of the band’s creative process. Each set of lyrics is given a context by the author: the story or inspiration behind them, where and when they were written and what the band was doing at the time. Alongside these he produces John, Paul, George and Ringo’s first handwritten expression of the song, usually scribbled but occasionally spelled out in painstaking capitals, on scraps of paper, unpaid bills, hotel notepaper or whatever happened to be at hand when inspiration struck.

Even Beatles fans who think they have seen it all before could spend hours looking at these, gaining new insights from their crossings-out, their words in the margins, even their little doodles. A great many of Lennon’s songs, for instance, grew from catchy titles or words or phrases that titillated him, while McCartney and George Harrison were more likely to conceive of a song first as a collection of verses, a chorus and a middle eight.

For instance, Lennon, who wrote A Hard Day’s Night on the back of a children’s birthday card, changed the sixth line to “I find the things that you do” after Maureen Cleave – the journalist who later quoted him as saying the band were bigger than Jesus Christ – told him the original lyric, heavily crossed out here, was feeble.

There are those who would argue, of course, that all of this analysis is irrelevant to one’s enjoyment of the songs. Lennon himself once said that talking about music was like talking about sex – it was a poor substitute for just shutting the hell up and enjoying it.

It’s true that these lyrics weren’t written to be divorced from the music that helped make them so memorable. Or to be pinned down, pulled apart and held to the light like a Shakespearean sonnet. In fact the number of Beatles songs that can be read as poetry are fewer than you might think. (Across the Universe, In My Life and Eleanor Rigby suggest themselves immediately. And then what? Strawberry Fields Forever?)

This book is unlikely to enhance your enjoyment of the music any more than, say, having your photograph taken on the iconic zebra crossing from Abbey Road or visiting the site of the former Bioletti’s barbershop, which features in the lyrics of Penny Lane. But what it does offer are some fascinating insights into what was going on in the minds of these four extraordinary individuals during that brief window of time when they changed popular music forever. And they did it, as the number of songs scribbled on hotel notepaper suggests, while they were shuttling around the world, being The Beatles.

Paul Howard is a journalist and author and the creator of Ross O’Carroll-Kelly. He is completing a biography of Tara Browne, the Irish-born Guinness heir whose death in a car crash inspired the opening lines of The Beatles’ A Day in the Life