The Arms Crisis of 1970 – The Plot That Never Was: Readable but lacking context 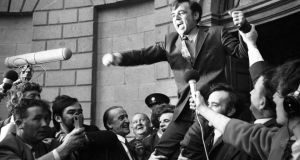 John Kelly is carried shoulder heigh from the Four Courts after the verdict of his acquital of arms smuggling was announced in the Arms Trial on October 24th, 1970. Photograph: Jimmy McCormack/The Irish Times

Fifty years ago Ireland was transfixed by the Arms Trial. In popular memory the crisis is largely recalled as one in which taoiseach Jack Lynch took decisive action to save Irish democracy, dismissing ministers Charles Haughey and Neil Blaney for conspiring to illegally import arms for use by northern republicans.

A new study by Michael Heney asserts that Lynch and his allies, through a combination of “false testimony, silence, evasion and various forms of subterfuge”, scapegoated Haughey and Blaney and destroyed the career of Army officer Capt James Kelly.

8 ‘Stardust took me over. It turned me into a victim too’

9 Ireland’s lost golf courses: What happens when the gates close?

11 Richie Power: ‘To me, Kilkenny’s problem is at the roots’

12 Covid-19 infection rate in hospitals ‘out of control’

14 Meal Box review: From the first bite you will be bowled over

16 David McWilliams: Why the young are priced out of the Irish economy

20 Covid-19 and travel: Quarantine and increased Garda checks near Dublin airport on cards

21 Garda trauma: Sean was a garda for six weeks when he saw his first body

25 ‘I got a burning smell in my nose’: Third-wave Covid-19 patients share their experiences

26 Teaching was Jerry Kiernan’s vocation; in 30 years he never missed a day

27 A Kerala Kitchen curry for the weekend

32 Beyond the guidelines: How not to get Covid-19 this weekend

34 Behind Her Eyes: Eve Hewson could have found star-making role in Netflix thriller

35 Miriam Lord: Healy-Rae scooting around and giving the Honda 50 a run for its money

38 Remote working ‘revolution’ bringing people back to towns and villages

39 The chickpea stew that broke the internet in the US is here. Give it a go