The Age of Static: Can we really understand a country by its TV? 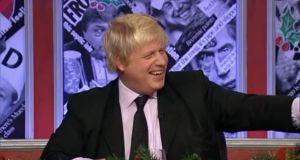 “Harrison, like other commentators, sees a reality television aesthetic at work in the personae of Nigel Farage, Boris Johnson and Donald Trump . . . Johnson thrived on Have I Got News for You.”

“Via television it is possible to construct an illuminating alternative history of the last two decades,” promises Phil Harrison in his introduction to The Age of Static. “How did we get here?”

The idea that modern Britain is rendered explicable by its television programming makes a certain amount of sense to people in Ireland. We’ve always felt we know more about the British than they know about us, all because we have “the channels”.

6 I’ve just won a scholarship. So the Government wants to take away my disability allowance

8 Colin Farrell: ‘After 20 years of drinking the way I drank, the sober world is pretty scary’

12 Murmuration of starlings: How our stunning front-page photograph was taken

20 Walk tall, golfers, and tell Leo that golf is not the enemy at the gate

27 Worn out by office Zoom meetings? Here’s how to stop them driving you up the wall

29 Loyalists and the Irish Sea border: ‘From what I’ve seen it’s all hyped up’

33 Teenager injured after goalpost fell on her secures €52,000 settlement

36 Covid-19 Vaccine Tracker: What's available in the Republic of Ireland and what else is coming?

40 The Movie Quiz: How many films have Scorsese and De Niro made together?