Talking to Strangers: Malcolm Gladwell at his best

Book Review: New Yorker writer takes a fire poker to our fixed set of assumptions by examining why society is so polarised and what we can do about it 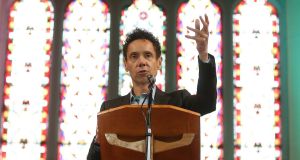 Malcolm Gladwell: His latest book tackles many diverse and ‘charged’ issues such as the Amanda Knox trial to the scandal of convicted coach Larry Nassar. Photograph: Conor McCabe Photography

“Polarised” is a buzz word we hear annoyingly often these days. Politics, war, Brexit, Trump, abortion, guns – either you’re one way or the other, in or out, at the table or on the menu. Malcolm Gladwell’s new book, Talking to Strangers, hinges on an incident that provoked “polarised” opinion. It goes like this: a black woman is pulled over on a road in Texas for failing to indicate when changing lane. A white male police officer walks up and begins questioning her, asking her to get out of the car. They argue, it escalates. He tries forcibly to remove her, she protests. Another unit is called. She is arrested and jailed. Three days later she is found dead in her cell.

Harrowing. Confusing. Unfathomable. You may remember the incident. The video, recorded from a dashcam, was viewed several million times on YouTube. Afterwards, people went crazy. Many believed racial prejudice was to blame. Only months previously an 18-year-old black man had been shot dead by Missouri police for allegedly shoplifting a pack of cigars. For others, however, incompetence was the only explanation. In their minds, the episode was so unique and odd that each detail warranted parsing. “One side saw a forest, but no trees,” Gladwell observes. “The other side saw trees and no forest.”

15 Irish Times view on the restless state of unionism

21 Joey Carbery on the Munster bench again for Connacht clash

24 Davy board to search for other potential cases of wrongdoing

26 I, Tonya reveals a deeper truth than Harding’s level of guilt

29 Long Covid in children: New data is cause for concern, scientists say

39 TG4 documentary to lift lid on ‘much maligned’ Peig Sayers