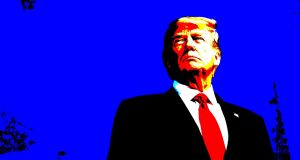 US president Donald Trump looks on before delivering a speech during the World Economic Forum in 2018 in Davos. Photograph: Fabrice Coffrini/AFP via Getty 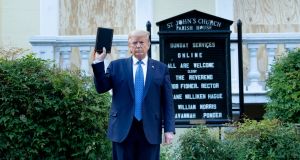 One very noticeable thing about Washington DC is the ubiquity of memorable quotations. The grand marble monuments to Lincoln and Jefferson are formal to the point of pomposity, but are made meaningful by the words carved on the walls. The opening lines of the Declaration of Independence, authored by Jefferson and placed in his memorial; the text of Lincoln’s second inaugural speech and the Gettysburg Address grace his monument; and down the steps from there, on the spot where the words were uttered by Martin Luther King, is carved “I have a dream”.

This entire infrastructure of historical memorial in the United States is designed to create a pleasing narrative of progress, of a republic being gently perfected over time, so that the ending of slavery or civil rights reforms can be absorbed into a national mythos as if they had always been intended, rather than resisted and fought for.