"The look on her face said: please don’t bore me, please make me laugh" 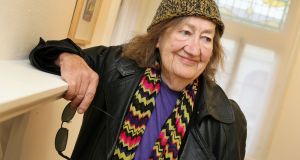 Leland Bardwell in 2008: I loved the house in Sligo; it was like a capsized boat. The locals told her that she would soon tire of the sea and that was why the wall was there. To stop the sea looking at her and to protect her from having to look at the sea. She made a hole in the wall so that she could see the sea. Photograph: James Connolly 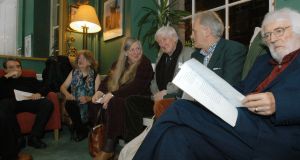 Macdara Woods, Leland Bardwell, Eiléan Ní Chuilleanáin, John Montague, Paul Durcan and Tom MacIntyre in the green room at the Gate Theatre before going on stage to read from The Great Hunger and other poems by Patrick Kavanagh at the Patrick Kavanagh Centenary Celebration in Dublin. Photograph: Moya Nolan

She came to Gorey in the early 1970s with all her beautiful children. They had high cheekbones and lived like gypsies in a caravan in Courtown. When she ambled with her wide walk into French’s pub, she was clearly out for the night. The look on her face said: please don’t bore me, please make me laugh.

There are two sorts of writers, those who follow the literary pages and try to keep up with what’s new, and those whose reading is random, made up of books from different centuries and in various styles and genres, writers known and unknown, books bought and found. She belongs to this second category.

In the early 1980s she was evicted from her house off Hatch Street and out to Tallaght. She didn’t like Tallaght and fought to get out of there. She proved herself to be steely, determined, stubborn, characteristics which in her normal daily life she had managed not to need or bother with.

Ten years later, we went to Spain and wandered in Castile with Bernard and Mary Loughlin. On the first night, we failed to find a hotel anywhere in the vicinity of Segovia. The others voted to sleep in the car and then fell asleep forthwith, leaving me awake, watching them and the darkness and the dawn that took its time. She slept peacefully, easily, like someone with a clear conscience, and no sins on her soul.

Leland Bardwell was a Miss Hone.

At night after dinner in that trip to Castile, when the Loughlins would go to bed, me and Leland would find another bar and stay up late and laugh our heads off.

Maggie’s Cottage on the edge of Annaghmaerrig, the Hillman Imp and her. It was hard to know sometimes which was the cottage, which the imp, and which was the poet, so carefully and intricately were they entwined.

I interviewed her once for The Sunday Independent. Interview isn’t really the word, I just frightened her. I frightened her before I arrived, while I was there, and after I’d left. I wanted a chronology, a shape to her life that she could explain, as most inteviewees try to do. She couldn’t see the point. And then? And then? She smiled. She tried. She wanted me to leave. And when I had gone she wanted me to come back and rub out a whole lot of the questions and the answers. But she was too polite and modest to do that. So she just worried.

In Castile that time with Bernard and Mary Loughlin we came to a lake. It was early May so Bernard and Leland decided it was time for a swim so they dived in. Mary Loughlin and myself watched as they swam right out, turning and waving, having, we supposed a whale of a time. And then they began to roar, both of them, deep from their bellies and their bowels they howled. They swam towards the shore as fast as they could, gasping and yelping but mainly roaring, roaring deeply. The water, it seemed, with no warning had turned freezing suddenly in the middle of the lake. It was the coldest they had ever been; it was, in turn, the loudest most heartfelt howling we had ever heard.

I loved the house in Sligo; it was like a capsized boat. The locals told her that she would soon tire of the sea and that was why the wall was there. To stop the sea looking at her and to protect her from having to look at the sea. She made a hole in the wall so that she could see the sea.

Every poet has one party piece. Hers is called A Single Rose:

I have willed my body to the furthering of science
although I’ll not be there
to chronicle my findings
I can imagine all the students
Poring over me
‘My God, is that a liver?’
Yes, sir, a fine example of how not to live.
‘And what about the brain?’
‘Alas the brain. I doubt if this poor sample
ever had one.’ As with his forceps
he extracts a single rose.