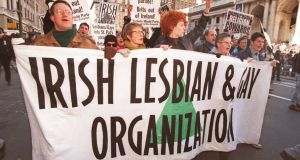 Members of the Irish and Lesbian Gay Organization march up Fifth Avenue in New York before the start of the 235th annual St Patrick’s Day Parade to demonstrate against their exclusion by the parade organisers, the Ancient Order of Hibernians. Photograph: Jon Levy /AFP/Getty Images

St Patrick’s Day is a global celebration of all things Irish. A vital part of most festivities is the parade, a tradition started in the United States in the 19th century and one that has had its fair share of controversy. Engaging with the history of these controversies reveals how much – or little – has changed in popular politics over the decades.

The 1991 New York parade became infamous after the Ancient Order of Hibernians’ (refusal to let the Irish Lesbian and Gay Organization march under their own banner. When ILGO did march as guests of a local division of AOH, alongside the mayor David Dinkins, they received shocking homophobic abuse. Dinkins likened the level of vitriol to “marching in Birmingham, Alabama” during the civil rights movement. The message was clear: for some in the Irish diaspora, you couldn’t be Irish and gay.

In response to this, on St Patrick’s Day in 1992, the Irish poet Paul Muldoon, as Lucy McDiarmid noted in her book The Irish Art of Controversy, published A Clear Signal in the New York Times. Muldoon took the opportunity to condemn the contemporary political situation in Ireland and Irish America. Beginning with the “tit-for-tat” violence that was one part of the euphemistically named Troubles, the poem also took aim at the restrictions placed on the reproductive rights of Irish women and, by implication, women from the US. Most intriguingly, Muldoon summons the “ghost of Roger Casement” as a challenge to the AOH ban. But why does Muldoon’s poem – which has never been anthologised or republished – use Roger Casement like this?

Casement (1864-1916) has left behind a controversial legacy as a human rights activist and an Irish nationalist. Born an Anglo-Irish Protestant, his radical politics would see him hanged as a traitor by the British in 1916 for liaising with the German military and attempting to use a shipment of German armaments in the Easter Rising. Prior to this, Casement had achieved nothing short of a spectacular career in the British colonial service and foreign office; his reports on the systematic abuse and racialised oppression that were inflicted upon labourers in the Congolese (1903-4) and Amazon (1910-11) rubber plantations earned him a knighthood. Despite Casement’s wish to be buried near his ancestral home in Antrim, the British refused to repatriate his remains to Northern Ireland in the 1960s out of anxieties over rising tensions. To this day, Casement still lies buried in Dublin’s Glasnevin cemetery.

During Casement’s trial, the British discovered and selectively circulated passages from Casement’s so-called Black Diaries, which detailed Casement’s sexual encounters, many of which he paid for with cash or gifts, with younger men. Debates about the veracity of the diaries began to circulate in the years following with some claiming that they were part of an elaborate forgery on behalf of the British.

In A Clear Signal, Muldoon makes it obvious that he thought Irish, and Irish-American, attitudes towards sexuality were as reactionary as they had been in the earlier decades of the 20th century. Sexual activities between men were not decriminalised in the North until 1982 and, even then, the age of consent was higher than for heterosexuals. In the Republic, same-sex activity between men would remain illegal until 1993.

If we look at Casement’s appearance in Muldoon’s poem, it is the ostensibly contradictory nature of Casement as both gay and an Irish nationalist leader that Muldoon is most concerned with. The reference to Casement occurs about three-quarters of the way through the poem, when Muldoon ruminates:

As for the “Hibs” standing in the way
of Irish Lesbians and Gays,

would they have stopped Casement when he tried to land
a boatload of guns on Banna Strand?

The “Hibs” to which Muldoon makes reference here are the previously mentioned Ancient Order of Hibernians, a fraternal society founded in 1836 in New York to advance the concerns of Irish Catholics in Ireland and the diaspora. In invoking Casement at Banna Strand – the historical incident at which, in his efforts to “land / a boatload of guns”, he was arrested – Muldoon focuses on the historical instance where Casement became a nationalist hero, as Casement knowingly undertook a doomed effort to bring armaments to a rising that he already knew would fail.

Muldoon uses Casement’s nationalist credentials to challenge the homophobia that the AOH had displayed to ILGO and, in so doing, asks about the inclusivity – or exclusivity – of Irishness. In the case of the St Patrick’s Day fallout, Irishness became an ethnicity, or a diasporic ethnicity, officially legislated through strictly policed contours of race and sexuality. It is significant that some of the language used to taunt the ILGO marchers attacked them on the grounds of being “English”.

While attitudes toward LGBTQ+ rights have always been depressingly mixed and ambivalent across the US, Ireland’s stance on such matters has, in recent decades, progressed at an astonishing speed. In 2015, Ireland became the first country in the world to legalise same-sex marriage through a referendum. In 2017, Leo Varadkar became Taoiseach: only the fourth openly gay head of government in the world. These rights don’t extend to all in the island, though: in the North, the DUP continues to block legislation that would make marriage a right for all, regardless of sexual orientation.

Despite the success of the marriage equality and repeal referendums in Ireland, Muldoon’s poem is alarmingly relevant once more as the political landscape of the US lurches to the right, with the rights of women and the LGBTQ+ community under threat. Northern Ireland still does not allow its citizens the rights afforded to those across the border or the Irish Sea; the 1967 Abortion Act was never extended to Northern Ireland, despite ongoing efforts, and the province still prohibits same-sex marriage. While the ghost of British imperialism continues to wreak havoc for the Ireland and UK through the chaos of Brexit, perhaps Casement has never been more contemporary.
Alison Garden is a Marie Sklodowska-Curie Fellow at Queen’s University Belfast. Her first book, The Literary Afterlives of Roger Casement: 1899-2016, is forthcoming with Liverpool University Press.