Sinéad Gleeson on The Long Gaze Back: The Irish Times Book Club podcast 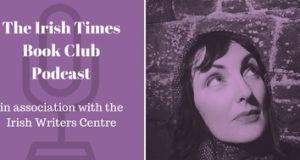 It has been a hectic month for Sinéad Gleeson, with The Long Gaze Back, her anthology of Irish women writers, Dublin’s One City One Book choice for 2019 as well as April’s Irish Times Book Club selection.

Given the number of events at which the editor has discussed her book, I was afraid The Long Gaze Back might become The Long Glazed Look but I needn’t have worried. Sinéad, until last year the long-time presenter of RTÉ’s The Book Show and author of a forthcoming collection of essays, Constellations (Picador, 2019) was in sparkling form, addressing not just the why but also the how of her anthology – its structure and her guiding principles – as well as more general questions such as what makes a good anthology and what can anthologies do.

Our conversation ranged over literary archaeology – was she not tempted to include more dead writers to drive home the message that there was a missing tradition to be championed? – to her championing of new voices, writers not yet published when she commissioned them for The Long Gaze Back.

Which of the contemporary writers does she believe will stand the test of time, and still be read – and athologised – in 100 years’ time?

And what of writing as a national sport? Does fiction respect borders? Considder the delicate wording in the subtitle of her follow-up anthology: The Glass Shore: Short Stories by Women Writers from the North of Ireland.

We also explored the cultural and social context surrounding the anthology. In her essay about The Long Gaze Back, Belfast writer Lucy Caldwell wrote: “Both anthologies seem part of something bigger that’s happening at the moment, channelling, like lightning rods, something of Waking the Feminists, Women Aloud, #MeToo, #IBelieveHer, #Repealthe8th, all of the conversations we’re having about women’s voices, women’s bodies, women’s stories, women’s autonomy.”

Sinéad also discusses her forthcoming book of essays and her work-in-progress, a novel and I ask her about other potential ways of celebrating and exoploring Irish women’s writing: a critical study and a broader anthology that might include poetry, essays, novel extracts and creative nonfiction.

And what of the best novels by Irish women?