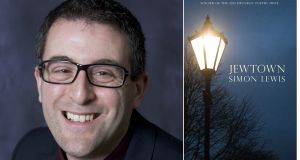 Simon Lewis: Part of my research in writing this collection involved me visiting the area of Jewtown, looking at windows, almost hoping to see a Star of David or Menorah. The cover of my book is an image of one of the lanterns in Shalom Park and I feel it is a very fitting symbol

I became a poet by accident. When my wife, Rozz, and I moved to Carlow during the Celtic Tiger years, we knew nobody. Both of us dabbled in writing so we decided to join a local writing group to try and meet some of the natives. Rozz sent me first to scout out whether it was safe. Among the group was a guy called Derek who lectured in the local college. Over the next few years, Derek brought me from having never written a poem to publishing my first collection. Derek, (and indeed all the members of the writers’ group), encouraged and mentored me at the exact pace needed to bring me stage by stage to being a better poet. One of the key moments in this journey was when he advised me to think about writing about my own heritage.

I was raised in a typical Irish Jewish family. This meant that we kept most of the laws and traditions with the odd Big Mac consumed when we thought no one was looking! I was raised in the liberal Jewish community in Dublin, which at the time was significantly smaller than the Orthodox community. Liberal Jews are often not taken seriously as “proper” Jews so it was interesting being an outsider among outsiders.

However, no matter which synagogue one attended, most Jewish families in Ireland trace at least some of their ancestors to the area around the second city of Lithuania, Kaunas. My great-grandmother’s parents travelled on a steamboat across Europe and ended up in Cork. The story goes that people had wanted to go to New York but misheard the name Cork and disembarked. I’m fairly sure this can’t be true but many Jewish people would beg to differ.

Most Jewish people lived in an area of Cork City near the gasworks. They were poor and had little English. Most earned their living selling various wares from door to door around the county, often on credit. The area became fondly known as Jewtown, with no derogatory intentions. The two most famous Jews to come from Jewtown are Gerald Goldberg and David Marcus. Goldberg was Cork’s only Jewish Lord Mayor and Marcus was well known in literary circles as the founder of New Irish Writing, which still lives on in The Irish Times with Ciaran Carty.

I found this to be fertile ground for poetry. My research materials were scarce, consisting mainly of the following sources: Jews of 20th Century Ireland by Dermot Keogh; the 1901/1911 census records; and Stuart Rosenblatt’s volume of genealogical research on the Irish Jewry. Combined with my own knowledge of Jewish traditions as well as reading some memoirs by members of the Irish Jewish community, I set about writing poems about these immigrants and tried to imagine how they must have felt coming to this strange country after fleeing the Russian pogroms.

I was lucky that many of the census records provided interesting springboards for poems. The very first poem that I wrote about Jewtown was about a man called George Smith. According to the census records, he was a widower and I decided that his wife had died on the journey on the ship from Russia.

Two Sisters was another poem inspired by census records. I noted that there was a house where the head of the household was a 24-year-old shopkeeper called Sarah Hodes. She lived with her sister who was 17 and a seamstress. It was strange for the head of a household to be female at the time and Sarah seemed to be young to have become widowed. I decided that I would create a story about these two sisters using their various skills to survive. Sarah became a flirty shopkeeper using her “bare neck” to sell her produce and her sister would reap the benefits when Sarah would send the men to the house to buy dresses for their wives. Since writing this poem, the family of these two sisters got in touch with me. They have no idea why they happened to be living in Cork on the night of this census but they told me they moved to South Africa soon after where their descendants still live. I hope they’ll forgive my poetic license.

Part of my research in writing this collection involved me visiting the area of Jewtown, several times. The houses may have been extended and there were cars lining the roads but generally, it did feel a little bit like stepping back in time. I found myself wandering the streets looking at the windows at the front of houses, almost hoping to see a Star of David or Menorah. A park was opened in 1991 beside these houses and it was called Shalom Park to commemorate the Jewish community. I have walked around this park several times and managed to chat to some elderly dog-walkers who shared their memories of the last Jewish people who lived in the nearby streets. However, one of the most fascinating things for me in the park were the voices in playground; almost all of them were Eastern European, which I felt was appropriate. The cover of my book is an image of one of the lanterns in Shalom Park and I feel it is a very fitting symbol for the book.

In the five years I have spent creating Jewtown, I’d like to think I have thrown a little bit of light back to a city, which has recently lost one of its last symbols of Judaism from its streets, when the South Terrace Synagogue closed its doors in February. I also hope that I’ve managed to convey how any immigrant might feel when they arrive in a new country. In a way, this book mirrors my own journey as somewhat of an immigrant to poetry as I learned the various techniques and methods of writing decent work, making friends and learning new things along the way.

Simon Lewis, emerging poetry winner at the Hennessy Literary Awards 2015, will read from his debut collection, Jewtown, on the Hennessy Granary Stage at the Borris House Festival of Writing & Ideas. The festival takes place from June 10th-12th