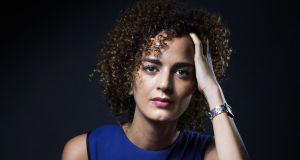 French-Moroccan writer Leila Slimani: her book demonstrates the ways in which women’s bodies are the battleground for colonial and cultural tensions. Photograph: Joel Saget/AFP/Getty

What did it take for a book like Sex and Lies to get to me? First, its author had to be born. (That’s obvious, but let’s start there.) Leïla Slimani was born in Morocco. She grew up in Rabat and was raised Muslim. At 17, she moved to Paris to study political science, then worked as a journalist with Jeune Afrique. Sex and Lies is not a memoir, but Slimani’s autobiographical details are noteworthy; who she is, recording this story.

Next, she had to become a writer. This is relevant in terms of craft, but also because it was on a tour for her book, Adèle, that Sex and Lies began to take form. Women came to her. They told her their stories. “Novels have a magical way of forging a very intimate connection between writers and their readers, of toppling the barriers of shame and mistrust,” she notes.

1 Coronavirus: Varadkar returns to practising medicine to help during crisis
2 Donald Trump’s clown car administration has put the fear in all of us
3 Restarting Ireland: When and how will we ‘get back to normal’?
4 Irish doctors on getting Covid-19: ‘In 90 minutes, I deteriorated quite rapidly’
5 Robbie Lawlor profile: A feared criminal with a long list of enemies
6 Coronavirus: Plans to move 600 consultants into public system hit obstacle
7 Coronavirus: Boris Johnson in hospital for tests as symptoms persist
8 Dublin criminal Lawlor may have been shot dead by man who owed him money
9 Infected but feeling fine: the unwitting coronavirus spreaders
10 Una Mullally: Leo Varadkar’s mask drops again
11 Tuberculosis vaccine ‘potential game-changer’ in Covid-19 fight
12 What is Houseparty, the app everyone’s talking about – and not in a good way?
13 Coronavirus: Co Tyrone couple buried together after dying 20 hours apart
14 Fewer deaths in Veneto offer clues for fight against coronavirus
15 How Covid-19 has changed the face of Irish shopping
16 Coronavirus: Number of Irish cases nears 5,000 as 21 further deaths confirmed
17 Coronavirus: Social distancing on the beach as people ‘get the message’
18 Mary Lou McDonald: This crisis shows that Sinn Féin was right
19 Coronavirus lockdown steps could remain into winter, says expert
20 Ireland has struggled to protect nursing homes from Covid-19
21 Netflix has revealed its most-watched content. You might be surprised
22 Make a move to Irishtown – the affordable side of Dublin 4
23 Five men charged after garda car attacked at Traveller halting site in Cork
24 Man City to investigate Kyle Walker over lockdown sex party
25 A letter to Ireland from Italy: this is what we know about your future
26 Covid-19 testing: Irish pharma firms source raw material to make reagent
27 Man arrested after reportedly threatening staff in Dublin shop
28 An ‘Asian flu’ pandemic closed 17 Dublin schools in 1957
29 Unions again urge change in wage subsidy scheme
30 Acclaimed Connemara writer Tim Robinson dies at 85 from coronavirus
31 Fintan O’Toole: Earth has a toxic virus – us
32 Coronavirus: Situation in Ireland ‘misrepresented’ because of limited testing
33 Queen Elizabeth invokes spirit of second World War in speech
34 Chris Johns: A shopping list for the post-Covid-19 world
35 Desmond Morris on the Irish: ‘There’s a humour there, and a love of the eccentric'
36 Are holidays booked for July and August going to happen?
37 Nuns, non-virgins and a serial killer: Sharing stories through nature in west Cork
38 Dublin deserted: Coronavirus turns city into ghost town
39 Coronavirus: Analysis shows median age of confirmed cases is 48 years
40 Fintan O’Toole on Tim Robinson: ‘One of the greatest writers of lands’
Real news has value SUBSCRIBE