Seeing WWI and the Irish Revolution as linked Great Wars 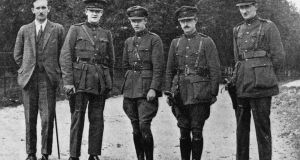 As the 1918 Armistice is marked on November 11th, the focus of the “Decade of Centenaries” will change. Gone will be parallel remembrance of the first World War and events of the Irish Revolution. In its place will be complicated and perhaps even raw commemorations of revolutionary centenaries which still have political resonance today.

It will be easy to assume that commemoration of the first World War is over, but that would be a mistake, partly because there is still an appetite among many Irish people to research and mark the dead of that conflict. Family history is not going away. It would also be mistaken because the first World War and the Irish Revolution were intimately connected processes which are hard to understand without constant reference to the crossovers between the two.

Instead of seeing the First World War and the Irish Revolution as two separate events which happened at the same time, incidentally sharing some connections, we should see them as part of a series of “Great Wars” in which conflicts of nationalism, imperialism and military service were played out from the turn of the century to the 1920s and beyond.

This is the approach I have taken in my book Dublin’s Great Wars: The First World War, the Easter Rising and the Irish Revolution. My research found: at least 35,000 Dubliners in the British military in the first World War (about 6,500 of them dead); nearly 4,000 more (90 per cent of them women) in the Red Cross; and over 2,100 Dubliners with service in Republican forces in the Rising (then by the Truce of July 1921 nearly 5,500 were in the Dublin Brigade of the IRA). From all these individuals, five stories help to explain why we should see this period as one of Great Wars.

Thomas Francis Byrne was born in Co Monaghan but later settled in Dublin and was in the GPO garrison at Easter 1916. In 1899, Byrne was in South Africa and as a member of the Irish Transvaal Brigade joined Boers in their fight against the British Empire. Both at Talana Hill and at Colenso, his unit faced members of the Royal Dublin Fusiliers. One of them was Michael Tracey, born in Rathmines in the same year as Byrne, 1877. He was working as a labourer when he enlisted in the Royal Dublin Fusiliers in 1895 and served through the South African War before becoming an army reservist and being mobilised in August 1914. In Easter Week 1916, he was one of the Dublin Fusiliers killed at Hulluch during a German gas attack. It is unlikely that Byrne and Tracey ever met, but the factors which saw them in opposing forces in 1899, and doing very different things at Easter 1916, help explain why these conflicts were a series of Great Wars.

The fighting of the Irish Revolution was not simply about the precise circumstances of 1916-23 but represented longstanding struggles within the British Empire. The South African War was a prelude to both the first World War and the Irish Revolution since Irishmen saw the same issues at stake: in Byrne’s case, the rights of a colonial people, in Tracey’s case a willingness – for whatever reason: economic pragmatism, loyalty or something else – to serve in British forces and uphold British power.

Some men wanted to make their own mark on that story in any way they could. In the early days of the Rising, Lieut Tim Finn’s Blackrock Company of the 3rd Dublin Irish Volunteers suffered from the confusion caused by Eoin MacNeill’s countermanding orders. Many went home but Finn took men into the city, only to fail to connect with his unit before retreating to Stillorgan Grove. They holed up there but by the Friday morning the ranks included just Finn and one other so he himself went home. Finn was an IRB member and was distraught at having played no part in the Rising. Aside from his politics, he was a man who wanted action and having become despondent he enlisted in the Irish Guards. There he saw the fight he had been deprived of in Dublin, only to be killed in action in late August 1918. His story is an indicator of the reasons for which some men engaged in the Rising – not only the cause of Irish freedom, but in some cases simply a desire to do something adventurous or significant. In that sense, some British soldiers and Irish rebels had much in common.

Then there is the better known case of Emmet Dalton. Joining the British army in 1915 he won the Military Cross at Ginchy on the Somme and served at Salonika and in the Middle East. Returning to Dublin in 1919, Dalton took up the study and employment opportunities readily available to a former British officer, but he also joined the IRA (of which his brother, Charles, was already a member). Emmet Dalton was with Michael Collins in London during the Anglo-Irish Treaty negotiations. At the outbreak of the Civil War he secured the British guns which pounded the Four Courts, but later left the National Army from the rank of general, angered at executions of prisoners.

Dalton’s journey symbolises the switch by middle-class Catholics from the Irish Parliamentary Party to Sinn Féin, a switch which came about because of the events of 1916-18. That symbolism becomes even stronger when one notes that not only was he with the former nationalist MP Thomas Kettle as he died at Ginchy in September 1916, but he was also travelling in Collins’ car when he was killed at Béal na mBláth in August 1922.

Michael McCabe of Dolphin’s Barn served in the Rising as a 15-year-old Irish Volunteer, and spent a week in prison before being let out when the British realised his age. He then joined the King’s Own Royal Lancaster Regiment in 1917 and was wounded in 1918 but remained in British army post-war. Deserting in 1922, he joined the anti-Treaty forces in the Four Courts garrison. A Free State prison followed and he next shows up in records in 1938 when he applied for his IRA pension. Incredibly, McCabe’s correspondence address was the Gold Coast Regiment of Britain’s Royal West African Frontier Force. Writing to a friend who was assisting with the paperwork, he said, “I have not had my statement witnessed out here, afraid it just wouldn’t suit.” McCabe served through the Second World War in British forces, and left in 1946. He lived until September 1975, when his home was in Portrane. His death certificate described him as a “Retired British soldier”.

McCabe left no detailed description of what he had done, beyond his IRA pensions file, let alone any explanation. We can speculate on the appeal of the excitement of 1916 to a 15-year-old member of the Volunteers, influenced by his father’s membership of the IRB. Perhaps personal friendship made him join the anti-Treaty IRA (he knew Liam Mellows). If joining the British army twice was for economic reasons, he was hardly the first Irishman to succumb to the lure or necessity of the King’s shilling. We might also wonder if he simply enjoyed military life, whatever the army and whatever the cause. Perhaps at different times the opportunities open to him were extremely limited.

None of this can be known. What we can be sure of is this: the cases of Byrne, Tracey, Finn, Dalton and McCabe show that lines between the first World War and the Irish Revolution were blurred. Connections between the two could be strong. Meanwhile, during the years 1912-23, British and Irish soldiers could be both the worst of enemies and the best of comrades. In that era, this was the paradox of British-Irish relations.
Richard S Grayson is professor of 20th-century history at Goldsmiths, University of London. Dublin’s Great Wars: The First World War, the Easter Rising and the Irish Revolution is published by Cambridge University Press