Armagh women’s prison protests promoted feminism within the republican movement and challenged sexist attitudes, but women’s issues were not a priority for Sinn Fein 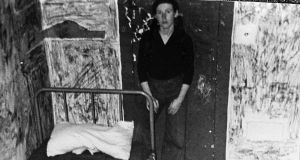 Feminist demands were secondary to the Republican agenda and most female members implicitly understood and supported this. Mairéad Farrell, on “dirty protest” at Armagh jail in 1980 and later a hunger striker, summed up this reasoning: “I am oppressed as a woman but I am also oppressed because I’m Irish. Everyone in this country is oppressed and we can’t successfully end our oppression as women until we first end the oppression of our country.” Photograph: Pacemaker

Armagh was the only women’s prison in Northern Ireland and until 1976 all those with political status were recognised by the prison authorities. After the introduction of the criminalisation policy on March 1st, 1976, the Armagh women prisoners went on a “no work” protest, which due to harsh penalties imposed by the prison governor had escalated into a “no wash” protest by February 7th, 1980.

On December 1st, 1980, Mairéad Farrell, Mary Doyle and Mairéad Nugent joined the hunger strike from Armagh Jail. Although this protest was somewhat overshadowed by that in Long Kesh, it raised questions regarding the attitudes of feminists to the involvement of women within republicanism. Furthermore, within republicanism itself, it brought into focus the role of women and feminist principles within the movement.

Hunger striking as a feminist issue

Nell McCafferty, the Irish feminist writer, believed that the issue of the Armagh women prisoners was a basic issue of integrity for feminists. She argued that the protests were a direct consequence of the very imperialism which feminists believed was violating the rights of women through the direct denial of – among other things – medical care and attention to the prisoners. She stated that “the choice facing feminists on the matter of Armagh Jail are clear-cut. We can ignore these women or we can express concerns about them. Since the suffering of women anywhere, whether self-inflicted or not, cannot be ignored by feminists, then we have a clear responsibility to respond.” (Irish Times, August 22nd, 1980)

In this argument, Women Against Imperialism, who organised the annual protest outside Armagh prison on International Women’s Day, supported McCafferty. In a 1983 article in Spare Rib they argued that Women Against Imperialism “maintained that to support the prisoners didn’t mean a neglect of feminist demands, but they could not ignore the direct effect of British Imperialism in Ireland” (May 1983). Whilst the editorial team and writers of Spare Rib were on the whole sympathetic to republican feminists and the Armagh protesters, their readers were not, and on its letters page it is hard to find a letter supporting women campaigning from a republican feminist perspective (apart from one from the Armagh protesters themselves).

Such writers supported the views put forward by the feminists replying to Nell McCafferty’s Irish Times article, and expressed a cynicism about the place of women in the nationalist movement: “the so-called nationalist cause has no more place for women than the present ‘imperialism’ which is supposedly oppressing women”. (Spare Rib, June 1980)

Feminists writing from this point of view not only abhorred the violent nature of the republican movement but argued that “their [feminist republicans’] male mentors had so thoroughly inculcated the belief into their minds that socialism automatically represented liberation for women that they refused to examine it for themselves”. (Irish Times, September 5th, 1980)

But how far can such an analysis be justified? The republican movement gave a face to women’s issues with the creation of the Women’s Department in 1979, which was initially established as the Women’s Coordinating Committee. This department was founded as a direct result of a campaign by women within the republican movement who, despite their contributions, felt virtually invisible and who were dissatisfied with the idea that the issue of women’s repression was secondary to that of partition. The progress made by such women in bringing women’s issues to the attention of the republican movement was reinforced and furthered by the Armagh women’s protests.

This discourse translated itself into Sinn Féin’s women’s policy commencing with Women in the New Ireland presented to the 1980 Ard Fheis. This was a disappointment to many as it was the result of a compromise between the younger, radical elements in the movement and the older traditionalists. This compromise can be seen clearly in the section relating to abortion which at the time was the question concerning feminists. This document laid the foundation for Sinn Féin’s policy on women’s issues over the next decade. Issues such as sexism and stereotyping, violence against women and access to contraception were to become recurrent themes within the Women’s Department’s policy documents.

Taken in isolation, the language used in describing policy on each of these issues demonstrated a commitment to a feminist agenda. An example of this can be seen in the development of policy regarding equal opportunities. The policies suggested were comprehensive and practical and focused upon the need for the State to treat women equally both in the workplace and in the provision of benefits. Training was a central concern and remained an issue for the party. Such schemes were presented as a means of empowering women, enabling them to gain control over their own lives rather than being subjugated by men.

By examining the policy documents presented by Sinn Féin on women’s issues between 1980 and the late 1990s, it would be easy to assume that the relationship between feminism and republicanism was uncomplicated with both ideologies being motivated by a desire to promote women’s rights and improve their position within society. This, however, is where the relationship assumed by many to exist between the two ideologies ends, as underlying the development of the Republican movement’s policy on women was a fundamental issue: partition.

Every policy was linked back to this with most of the documents published prior to the 1998 Good Friday Agreement relating to women’s rights beginning with a section outlining the brutality of the British State and its effect on women’s lives. According to this reasoning, the only way in which women could enjoy equal rights was through a reunified Ireland as national liberation was the pre-condition for socialism and the liberation of women. Feminist arguments and demands were therefore secondary to the Republican agenda and most female members implicitly understood this and indeed supported it fully.

Mairéad Farrell, one of the Armagh hunger strikers, summed up this reasoning: “I am oppressed as a woman but I am also oppressed because I’m Irish. Everyone in this country is oppressed and we can’t successfully end our oppression as women until we first end the oppression of our country.” She does, however, state that women have to play a prominent role in the movement in order to achieve that equality. Sinn Féin created a feminist agenda for themselves which although espousing the rhetoric of mainstream feminism took on a distinctly Republican flavour demonstrating that feminism and republicanism were not “two sides of the same coin” in the aftermath of the hunger strikes but rather that feminist ideas were another means of highlighting the need to overthrow the British hegemony.

Although the stand made by women during the 1980 Armagh prison protests went some way towards promoting feminism within the republican movement and challenging sexist attitudes, women’s issues were not a priority for Sinn Fein and it has been alleged by one anonymous female Irish republican that they were excluded from decision-making structures within the party: “Women in this country … have been excluded from all levels of decision making … within their political parties. Sinn Féin is no different than any organisation … Within Sinn Féin as elsewhere political decisions are being made by a minority of men despite some gestures of representation for women.” (Women in Sinn Féin, May 1995).

Maria Power is a lecturer in the Institute of Irish Studies, University of Liverpool