Salazar: The Dictator Who Refused to Die 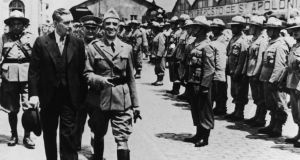 In 1938, delegates at the Catholic Social Conference in Belfast heard that there were “only two states in Europe that furnish us with striking examples of what God demands. One is the Portugal of Dr Salazar and the other is Éire.” António de Oliveira Salazar’s 36-year dictatorship was often the object of admiration in Ireland; in 1940 the Irish Independent declared that it showed the world “what a small state can do when it is well-governed”.

The Scottish political scientist Tom Gallagher’s new biography of the dictator does not make direct comparisons with Ireland, but Irish readers may naturally draw them. When Salazar was born in the small town of Vimieiro in the Dão valley in 1889, Portugal and Ireland had roughly the same population, both mostly rural countries on the Atlantic fringe of Europe’s industrial age, beset by poverty and emigration.

1 Gardaí believe men in Cork murder-suicide chose to let woman survive
2 James Bond actor Sean Connery dies aged 90
3 Supermarkets compared: How Dunnes, Lidl, Tesco and M&S measure up
4 Richard Ford: America could fail. I have never felt this way before
5 ‘In Crete I pay 70% of what I paid for a shoebox apartment in Dublin’s docklands’
6 Jack Nicklaus’ Trump endorsement leads to avalanche of dismay
7 The West has failed – US and Europe have made a mess of handling the crisis
8 Fintan O’Toole: Defeat for Donald Trump will shape our world
9 Coronavirus: Ban on household visits credited with slowing spread in Republic
10 Most face masks to protect against coronavirus do not meet standards
11 David McWilliams: A plan to put Ireland’s 200,000 vacant buildings to use
12 Jennifer O'Connell: Ireland's pandemic compliance is extraordinary
13 Ireland ‘outperforming almost all European countries in controlling spread of Covid-19’
14 Storm Aiden: Power outages reported as weather warnings come into effect
15 I hear Sorcha go, ‘Ross, I’m just popping out!’ I’m like, ‘Oh, fock!’
16 Nigella Lawson: ‘I feel insecure if I don’t know what I’m going to eat’
17 First full moon on Halloween night since 1974 will be rare ‘blue moon’
18 Six Nations - France v Ireland: Kick-off time, TV details, permutations, team news and more
19 UCD medical students withhold fees in protest at fee increases
20 The perfect traditional Irish barmbrack
21 Data Commissioner faces large costs bill in ‘most unusual’ Facebook case
22 Revenue publishes list of companies tapping State for wage support
23 Cosgrave Property Group secures exit from Nama
24 Coney Barrett unfairly targeted in attacks over childcare
25 WHO raises alarm over widespread and enduring damage of Long Covid
26 Two hundred Irish retailers for all your online Christmas shopping
27 Kanturk farm shootings: A timeline
28 World Handicap System: What is it? How does it work? Will my handicap change?
29 US election: ‘The police have to stop being the judge, jury and executioner’
30 ‘This could be Belfast in 1968’: How political conflict in the US could descend into violence
31 Return of Conor Murray’s box kicking could exploit French vulnerability
32 All-Ireland Senior Football Championship 2020: Our writers’ and pundits’ predictions
33 Cosy and colourful: this Wicklow cottage is a décor delight
34 Irish surfer Conor Maguire rides ‘Ireland’s biggest wave’
35 Covid-19: Johnson considering new lockdown for England
36 The real Contagion virus is out there and it’s causing virologists to worry
37 Cork shootings: ‘Devastation was impossible to imagine’, funeral hears
38 Martina Navratilova: ‘If I had Twitter 30 years ago, I would have been raising holy hell’
39 Compliance with Level 5 restrictions ‘very high’, say gardaí
40 Six within 60: homes to buy within an hour of the M50
Real news has value SUBSCRIBE