Book review: How a ruthless streak brought ‘a fat wee kid’ to the top in Irish rugby 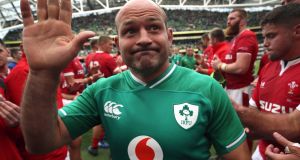 What makes a successful captain? Talent, the ability to motivate, communication, strategic thinking. We talk of players being born leaders but what’s interesting about Rory Best is that although not over-endowed with these qualities in his youth, he became captain of the most successful Irish rugby team so far.

How did he do it? The answer, mostly, is hard work, an ethic instilled during his idyllic childhood on the family farm in Armagh. Best accepts he was far from the most talented player, but he made himself one of the fittest. The “shy fat lad from Poyntzpass” had big boots to fill following the captaincies of Brian O’Driscoll and Paul O’Connell, but when he heads the poll in the squad vote, Best has the full support of Joe Schmidt, whom he describes as Ireland’s greatest coach.

1 Travellers call on comedian Des Bishop to apologise for ‘absolutely appalling’ comments
2 One hundred Irish retailers for all your online Christmas shopping
3 Confirmed: Golf clubs must close under Level 5 Covid-19 restrictions
4 A further three deaths and 1,167 new Covid-19 cases reported in the Republic
5 How long can Government afford to keep State pension age at 66?
6 Martin only told of contact tracing problem when texted Irish Times story
7 Covid-19 restrictions in Europe: how does Ireland compare?
8 Life under Level 5: What will the next six weeks look like for the State?
9 Kathy Sheridan: Now is the time for humility, not cynicism
10 Michael McDowell: What exactly is the price of accepting this Nphet advice?
11 Edwin Poots says he never sought to offend Catholics with Covid comments
12 A surgery attached to a house is adding €27k to the stamp duty, what can we do?
13 Six Nations - Ireland v Italy: Kick-off time, TV details, team news, standings and more
14 Pope Francis ‘backs civil unions for same-sex couples’ in documentary
15 Revamped D4 mews with Bond villainess credentials for €1.25m
16 Family settle case over death in hospital of 23-year-old woman
17 Hugo Keenan and Will Connors to make Ireland debuts against Italy
18 Irish start-up Wayflyer raises €7.8m in seed funding
19 Brexit: UK government suffers heavy defeat over ‘law-breaking’ Bill in House of Lords
20 ‘My sister preys on people’s weaknesses, and causes nothing but trouble’
21 People who throw house parties can be fined €1,000 and jailed for up to a month under planned law
22 Covid-19 Level 5 support bubbles: Everything you need to know
23 Suzanne Lynch’s US Election Diary: Trump ‘walks out’ of TV interview at White House
24 Irish borrowers face long wait for lower rates, Deutsche Bank says
25 Much of what we think about Covid-19 is wrong. We need to change the conversation
26 School ordered to reopen after closing due to Covid-19 fears
27 Schools should not reopen after midterm unless safety improves, say unions
28 Covid-19: State moves to Level 5 for six weeks with hopes of ‘meaningful’ Christmas celebrations
29 Ulster Bank tells ‘deeply concerned’ Minister no decision yet on future
30 Venezuelans ask for extended Irish visas with expired passports
31 Removing Catholic symbols and practices from State schools no easy task
32 An Post letter business collapsing under Covid-19 - CWU
33 Covid-19: Backlog forces HSE to skip calls to thousands of close contacts
34 Netflix’s Rebecca: The new Mrs de Winter isn’t a patch on the first one
35 Covid-19 laws: What can gardaí enforce and what penalties can be given?
36 Gordon D’Arcy: Ireland don’t need to do a Finn Russell on it
37 Six weeks of Level 5: Non-essential shops to close, no visitors to homes and a 5km travel limit
38 Bruce Springsteen quiz: How well do you know The Boss?
39 Farmer allegedly operating unapproved airstrip on neighbour’s land
40 Toyota Yaris: New supermini is stylish and spacious but faces stiff competition
Real news has value SUBSCRIBE