Rising poem: ‘Íota an Bháis’ for The O’Rahilly by Nuala Ní Dhomhnaill

A centenary poem as Gaeilge (translated into English underneath)

Rising poem: ‘Íota an Bháis’ for The O’Rahilly by Nuala Ní Dhomhnaill, a centenary poem as Gaeilge translated into English. This poem was commissioned by the Irish Writers Centre as part of the centenary celebrations. 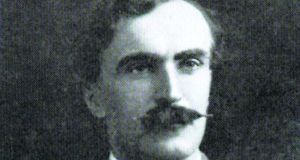 This poem was commissioned by the Irish Writers Centre as part of the centenary celebrations. Tomorrow’s poem is We Carried it to Here as Best We Could by Theo Dorgan

The O’Rahilly, born April 22nd, 1875, was a founder member of the Volunteers and treasurer in the run-up to the Rising. He had a great, deep singing voice and composed popular nationalist songs such as Thou Art Not Conquered Yet, Dear Land; this talent was used to good effect in raising morale in the GPO.

A supporter of Eoin MacNeill, the O’Rahilly opposed launching the rebellion. On learning Pearse had ordered the arrest of fellow officer Bulmer Hobson to bring about the Rising, the O’Rahilly was furious. He burst into Pearse’s study waving his pistol and shouted, “Whoever you send for me, make sure he’s quick on the trigger”.

On Easter Sunday morning, the O’Rahilly travelled by car to Limerick to deliver MacNeill’s order cancelling all Volunteer action. On returning early Easter Monday, he discovered the insurrection was going ahead, felt it his duty to participate and joined the other leaders at Beresford Place.

On Friday, April 28th, O’Rahilly offered to lead a party to find an escape route for the GPO garrison in the direction of Moore street. With a nod towards the British forces, he said, “I wonder do those fellows still think we’re afraid of them?”

One of the company remembered the subsequent charge. “The O’Rahilly drew his sword and took his place in front. Then at the words ‘Quick march – at the double’, we moved off along Henry Street and at a brisk trot rounded Moore Street corner.”

Eventually, O’Rahilly “was hit from the barricade and he fell face forward, his sword clattering in front of him. He lay motionless for a few seconds and we thought him dead.” He raised himself a number of times, and collapsed. “

Later he stirred and by supreme efforts, slowly and painfully dragged himself inch by inch into Sackville Lane a few yards away, where he lay down for the last time. The present memorial plaque overlooks the spot where he died.”

The Terrible Thirst That Comes Before Death

Sing out the name of the O’Rahilly.
Everything Yeats said about him was spot on.
Even if he wasn’t an hereditary chieftain
His was a form of blood baptism.

He was just like the Samildánach
When he arrived at the fort entrance:
Was there a gift in all the gifts of the world
That he didn’t have in abundance?

If they wanted music, he was a musician.
Playing the piano. Singing the songs of the people.
If they wanted art, he was an artist.
Drawing up heraldic arms and genealogical tables.

He was an organiser, a gazetteer.
He spoke French with elan.
He dedicated all his great gifts
To Cáit Ní Dhuibhir, to Cathleen Ni Houlihan.

He spent the whole of the Easter Weekend
Traveling around the Munster byroads,
Distributing O’Neill’s countermanding order
All the way from Kerry to Tipperary.

Even so, when Monday arrived
And he realized the battle was in full gear
He drove up to the front of the GPO
In his new De Dion-Bouton motoring car.

If anyone asks why he changed his mind
We have his own version on record:
‘Since I helped to wind the clock,
I might as well hear it strike’.

But if his fame rests on one thing,
What looms particularly large
Is his red rush down Moore Street
With himself at the front of the charge.

There were some who were more canny,
Who understood it was in vain,
That the British Army had a machine gun
That would blow the Volunteers to smithereens.

But he stood in the gap of danger.
Not only did he stand there, he strode there.
Knowing in his heart the Rising was madness,
But if so, a glorious madness.

The day I went on a walk-about
Following The O’Rahilly’s tracks
There was a demonstration on Moore Street
And the surrounding district.

What the people of the street said,
As they spoke so eloquently from the platform,
Was the area had been allowed to fall into neglect
And the State was to blame.

‘One hundred years ago, during the Rising
We fought against the Brits.
Now we are fighting our own people.’
The shame, the irony of it.

Because the place immediately put me in mind
Of the man who will be deemed a hero forever more,
His reckless charge down that self-same street
brandishing his sword.

When I got to the memorial plaque
Which enshrines the last letter he composed
I could barely make out the words
Given how I was blinded by tears of disgust.

Thinking of the man who wrote that letter
While he was dying so slowly and in such pain.
Nineteen hours bleeding out
Without medical aid. Without a moan of complaint.

When the terrible thirst that comes before death
Seized him and he wanted water
They didn’t allow him as much as a drop
Out of sheer spite and begrudgery.

Sing out then the name of The O’Rahilly.
Sing out his glory ever after.
The only one of the Rising’s leaders
To meet his end on the Field of Slaughter.