Reviewing this book put me off marriage. And book reviewing

In ‘Torpor’, the new novel by ‘I Love Dick’ author Chris Kraus, a couple make each other miserable 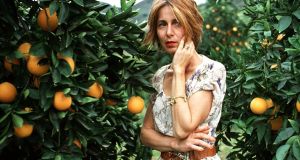 “How on earth do writers find themselves and their people this consistently interesting?” Above, Chris Kraus

Early in my reading of Chris Kraus’s third novel, Torpor, the detached nature of the narrative tone reminded me of a National Geographic special on, say, ostrich sex. A rather utilitarian voiceover would tramp us through the scenes while we, the viewers, remain patiently transfixed, hoping the ostriches will cave in, co-operate and perform for the camera – or, failing that, get accidentally run over by a car.

In Torpor there is a similar unknown anticipation as we read, but instead we are observing two artists, Jerome Shafir and Sylvie Green, who have self-marooned in upstate New York, in an ongoing crumbling marriage, heads buried inside the nylon zipper bag that transports their dog, Lily.

“At what point does entropy become negative? Stasis can’t stay still forever, it eventually spirals down . . . ” Sylvie writes in a journal entry late in the novel. She and Jerome seem to be chasing something collective while not really being certain what it is they are fleeing from, except themselves.

The only thing they have in common is consistently disappointing each other and admiring Lily in an invented, infantilised language. A union of anthropomorphic sharing and staring. (“As Sylvie holds their little dog and argues with her husband, they will both be being watched by two dozen idle taxi drivers.”)

Sylvie is a fascinating recording of mid-30s fury and angst. Her much older husband’s history and Jewish suffering (“Survival is the thing that he does best”) overwhelm her, and this overidentification with all he has survived creates the conditions in which he’s able to enjoy the benefits of her full and excessive attention while sidelining her and her work. Not that Sylvie isn’t a capable candidate in her own brewery of self-sabotage. She ghostwrites the essays he’s unable to deliver and supplies him with publishing ideas that succeed and receives no credit for them.

Like many an art wife, there’s space for Sylvie only as and when she services or supports Jerome’s needs and ambitions. She indulges his messy ex-wife-daughter situation while resenting the three abortions she agreed to and festering in the delusion that if only they have a baby it will relieve the torpor that has become their life.

As Jerome and Sylvie are loudly and obviously making each other miserable, Ceausescu is falling in Romania. The crescendo in their disastrous relationship comes when Jerome is awarded a fellowship from DAAD, the German academic-exchange service, and they take a road trip to Romania under the auspices of adopting an orphan. As they fight their way across the countries en route, it dawns on Sylvie that she hates Jerome and that they should adopt another dog instead.

Torpor is the most political of Kraus’s four novels and perhaps the most conventional. She has lashed straight news reportage beside her “they” autofictive narrative. The title of the book matches the durational performance experience in the reading of it. At times it’s endurance art and exhaustingly 1990s. Thus it is best to render the reading experience here for you, in an appropriation of the style of the novel itself.

It will just take the right cafe chair, even though for the last two days of trying to plough through this novel neither the cheese scone in an upright armchair nor sitting at the sushi bar, trying to read it with a glass of beer, delivered.

Would my life be improved?

I will be walking down the road, the weather will be shite and beneath my umbrella I will consider whether the cranes in the distance of downtown are ruining my life and whether my life would be improved if I started writing novels that describe this very street, these very feet, those aggrieving cranes, this pissy rain, my rage at the man who lectured me on abortion last night and how I settled all of it once I had a warm belly of beef and purchased a few Hello Kitty towels spontaneously on the way home.

Torpor will saturate my brain cells and frustrate me to wail aloud, How on earth do writers find themselves and their people this consistently interesting?

I’ll then record endless dispatches to other writers on WhatsApp, bemoaning how I am struggling to read this book but it’s not the book: it’s me!

I am doomed, because everything Kraus denotes about the futility of bickering artist relationships is true beyond truth. But I want to be released from this truth, take a brief sojourn under a concrete block and return instead to passive watching for sex on the ostrich farm.

A surprising deliverance will eject me from the entropic spiral, though, in the form of a remarkable prod of a paragraph thesis on the “female public I” and the finest sex advice I’ve read in 12 years.