Review: Victus – The Fall of Barcelona, by Albert Sánchez Pinol 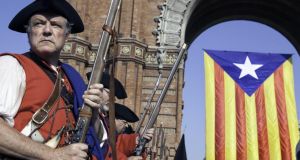 Men dressed as soldiers of the 1714 Catalan army are seen during a pro-independence demonstration as part of the celebrations of the National Day of Catalonia on September 11th, 2014 in Barcelona. Photograph: Joan Alvado/Anadolu Agency/Getty Images 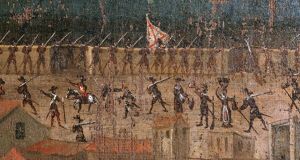 A detail of the defence of Barcelona’s city walls in 2014. Photograph: PHAS/UIG via Getty Images

Three hundred years ago last September, early on the morning of September 11th, 1714, the nuns in the Convent of St Peter in the then walled city of Barcelona lean out of the windows of their convent and, with shot and shell exploding around them and the air thick with smoke, implore their defenders , “Keep fighting – the angels are on their way to help us”.

Shortly after, the Marquis de Varennes, the Bourbon regimental commander who had led his French troops into the city through one of the breached walls, orders his soldiers to take aim at the convent. The cannons discharge their cargo. The convent crumbles. The nuns die. As do hundreds more.

The angels didn’t come. The city of Barcelona falls after a war, the War of the Spanish Succession, that lasted 13 years and a siege that lasted 14 months. Four thousand people are executed or deported. Thirty thousand others go into exile. The king of France succeeds in installing his grandson, Philip, the Duke of Anjou, on the Spanish throne. He becomes King Philip V of Spain and rules with an iron fist for three decades.

He proceeds to abolish Catalan laws, customs and liberties, including the Parliament and the Generalitat, the government of Catalonia. He bans the use of the Catalan language. He razes more than 1,000 dwellings and, where they had stood, builds a walled citadel to house his army of occupation.

That date, September 11th, is the national day of Catalonia. It is also their 9/11, both literally and figuratively. In the Catalan language it is called the Diada. Diada is untranslatable. It signifies big day, important day, D-Day, etc.

The Latin word, victus, means “defeated” and that’s exactly what Catalonia was in 1714, following the 14-month siege. The author, Albert Sánchez Pinol, is a Catalan anthropologist and writer who also writes extensively on Africa. His newest work is a very readable historical novel from the viewpoint of Martí Zuviría, a Catalan military engineer in charge of defending Barcelona from the besieging forces. The real Martí Zuviría was an aide-de-camp to Gen Antonio de Villarroel, the commander-in-chief of the Catalan forces, but apparently not an engineer.

Zuvi, as he calls himself, is now a crotchety old man dictating his memoirs in exile in Vienna.

The first part of the book is taken up with Zuvi’s education as a military engineer both to conduct siege warfare and to defend against it. Zuvi was apprenticed in France to Vauban, the greatest military engineer of his day. Any traveller to France will inevitably see one or more of Vauban’s works. He is credited with having built or rebuilt more than 300 fortifications in France and beyond.

The novel deals extensively with the techniques of siege warfare, its spies, trenches, mines, grenades, grenadiers and cannons, both generally and with regard to different sieges during the 13-year conflict, especially the final siege at Barcelona. There are dozens of diagrams of wall defences, trenches and battle formations at different stages of the various sieges described, as well as contemporary engravings.

Apart from falling in love with Vauban’s married daughter, Zuvi meets during his apprenticeship a number of principal actors later involved in the siege fighting on the Bourbon side, the most important of whom is “Jimmy”, the Duke of Berwick, James Fitz James.

Jimmy, the illegimate son of King James II of England, commanded the Bourbon forces that finally conquered Barcelona. Jimmy had been sent to France at the age of 7 to be raised as a Catholic, was sent to Austria and Hungary following his father’s accession to the English throne in 1685, fought at the Battle of the Boyne and then followed his father into exile in France.

In the novel, Zuvi tries to fight off Jimmy’s amorous advances, but succumbs. Jimmy will later offer Zuvi the post of royal engineer with the invading forces only for it to be refused. Later recaptured, Jimmy repeats his offer and Zuvi agrees – for appearances’ sake. He does what he can to weaken the Bourbon attack before slipping back into the city of Barcelona for the final assault that he knows will be devastating. And not before learning from Jimmy that Vauban’s daughter has borne his son, now six years old. He also passes up the opportunity to kill Jimmy in his bed, to his later regret. Like many in the 12-year campaign (including Gen de Villarroel), Zuvi had begun the war on one side but later changed. Zuvi will ultimately defend the city of his birth at the siege, get his face shot off but survive.

Just before the siege, in July 1714, Queen Anne of England, the last Stuart to rule England, dies. The author now embarks on a historical error. The novel reads, “When his father, the last Catholic king of England, was exiled, Jimmy was raised at the French court.” James Fitz James, “Jimmy”, was born in 1670, 10 years after the Stuart Restoration. His father was back from exile and his uncle was now king. Jimmy was raised as a Catholic because his father had secretly converted to Catholicism.

The author also has Jimmy believing that he is a serious pretender to the English throne and he considers abandoning the siege and going to England to claim the throne. There is no evidence for this. In any case, since he was illegitimate, he did not stand in line to the throne. Secondly, he was Catholic and England had gone to war to prevent a Catholic, his father, from continuing as king.

Victus is a bestseller in Catalonia and many Catalans consider Victus to be the great novel about the War of the Spanish Succession and its publication had been eagerly awaited.

Spanish prime minister Mariano Rajoy recently went to Paris to express his support for freedom of expression in the wake of the horrific killings there. Last September the Instituto Cervantes was due to launch the Dutch edition of Victus. Just days before it was due to be held, the Spanish embassy in the Netherlands ordered that the launch be cancelled. Officially, it was for scheduling difficulties. (Ironically, Utrecht is the city where the treaty was signed in April 1713 whereby the warring powers made peace behind Catalonia’s back and left it to face the might of France and Spain alone.)

So much for freedom of expression. To paraphrase the great American jurist, Oliver Wendell Holmes, freedom of speech (or expression) only means something if it means freedom for the idea that we do not agree with, or that we even hate. It is easy to grant freedom of speech to people who agree with you. He said that, unless there is a clear and present danger to the state, the place to defeat erroneous ideas is in the marketplace of ideas.

More than 220,000 copies of Victus have been sold. The Spanish government apparently thinks that that is enough.