A scholarly and informative collection, of definite interest to many who have lived with the after-effects of Vatican II, but it lacks a sharper Irish focus and dissenting voices 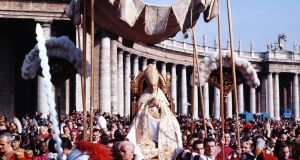 Author:
Edited by Dermot A Lane

The genesis of this collection was a conference organised by the Director of the UCD International Centre for Newman Studies, Pádraic Conway, in October 2012, to commemorate the fiftieth anniversary of the opening session of Vatican II.

Poignantly, the organiser died days before the conference was due to take place, but the event went ahead anyway in the knowledge that this is what Dr Conway would have wished. The result is a beautifully produced compilation featuring a number of the best known theologians in Ireland such as Seán Freyne (sadly also deceased), Jim Corkery, Gabriel Daly, Gabriel Flynn, Patrick Hannon, Linda Hogan, Enda McDonagh, Declan Marmion, Gerard O’Hanlon and Fáinche Ryan.

There can be no doubting the impact Vatican II and its documents exerted on the fortunes of the Catholic Church. When initially called by Pope John XXIII, few suspected that the Council would turn out to be such a seismic event, with a new emphasis on the enhanced decision-making role of the laity encapsulated in the idea of the church being the People of God, Mass in the vernacular, a flatter managerial structure, dialogue with other churches, and so on.

Vatican II was very much in tune with the Zeitgeist of the 1960s, a decade characterised by student revolt, the hippie revolution, foreign travel, the Beatles, space exploration, the fear of a nuclear Armageddon as a result of heightened tension between the US and the USSR. Former power structures around the world were being subjected to critique by a younger generation, many of whom had the benefit of a university education which equipped them with the skills needed to see how war, inequality and injustice were closely aligned to elites seeking to preserve their power and wealth at all costs. The amiable Pope John XXIII most likely felt that in order to survive, the church needed to be able to read and be responsive to the “signs of the time”.

In his Introduction, Dermot Lane notes how the Catholic Church in Ireland is currently at a crossroads and in need of renewal in the wake of the clerical abuse scandals and the ambient secularism that colours most people’s approach to many church teachings. The recent success of the referendum legalising same sex marriage, in spite of a number of prominent church leaders throwing their weight behind the No campaign, illustrates the extent to which the majority of Irish people are no longer prepared to be dictated to in matters of personal conscience.

Lane argues that if reform of the Catholic Church is to take place, it will be necessary to retrieve something of the vision that occurred during the Second Vatican Council. With the election of Pope Francis, it would appear that there is a certain openness to Vatican II thinking that was not at all evident in the thinking of his immediate predecessors, John Paul II and Benedict XVI.

One major caveat I have with many of the essays is that they fail to engage with how Vatican II was received and implemented in Ireland. While discussion of the impact of key figures like Henri de Lubac, Pierre Teilhard de Chardin, Hans Urs von Balthasar, Yves Congar, Karl Rahner, Hans Küng, Edward Schillebeeckx, Marie-Dominique Chenu, Jean Daniélou and the future Benedict XVI, on the direction the Council would take is extremely interesting, it does not address the Irish dimension. In several instances, one has the impression that contributors are merely concentrating on their specialisms, be it the Council’s approach to biblical scholarship, the renewal of religious life, theological ethics, the influence of Karl Rahner, and ecumenism. That is admirable in itself, but it means that the book will not have the appeal it probably should enjoy among the Irish public.

An example of this is Linda Hogan’s standout chapter on Catholic theological ethics, which highlights how the laity now look on themselves as partners in a complex process of ethical interpretation. However, as much of the more infamous misogynistic theology about women’s nature results from a tradition that regards the female body “as both the cause and consequence of their inferior status”, the result is a disconnect between official doctrine and its acceptance on the ground.

It would have been most interesting to see how negative attitudes to female sexuality led to so many women in Ireland finding themselves incarcerated in the Magdalene Laundries as a result of becoming pregnant outside of marriage, or the appalling custom of “churching” which obliged those who had given birth to be “cleansed” before resuming normal religious practice. Hogan is also correct in her assertion the church is now faced with a stark choice: either to pursue the inclusive vision of Vatican II or “retreat into the privileged and increasingly remote world of unaccountable power”.

Gerry O’Hanlon is of the view that Ireland has travelled a long way since the 1960s and the reassuring announcement by Archbishop John Charles McQuaid after returning from the Council that, “No change will worry the tranquillity of your Christian lives”. The unquestioning and anti-intellectual character of Irish Catholicism, where rule-keeping, moral scrupulosity, popular devotions, deferred gratification, deference to the clergy in all matters, was unable to survive the onslaught of modernity.

O’Hanlon quotes Archbishop Diarmuid Martin’s observation that instead of influencing Irish society, Catholicism is now being influenced and moulded by it. Certainly, it is time for the church in Ireland “to have more confidence and trust in the process of discernment”, which may well lead to an uncomfortable position for many within the church hierarchy, but which could ultimately prove beneficial.

There are many within the Catholic Church who would argue that the problems currently being experienced by the institution are attributable to the “excesses” associated with the false interpretation of the Council. It is difficult in an organisation as large as the church to bring about radical change without alienating many loyal adherents – Pope Francis is acutely aware of these difficulties – but, in the Western World in particular, there is a need as never before to create a model of church that can appeal both to the intellect and the soul.

Vatican II in Ireland, Fifty Years On is an important contribution to our understanding of the ramifications of a significant event in the history of the Catholic Church. The absence of any contrarian voices among the contributors is somewhat problematic, however. Surely it would have been possible to locate commentators not so obviously enamoured by Vatican II? Also, it would have been a good idea to include non-theologians to discuss the Irish angle.

Two people who immediately spring to mind in this respect are Louise Fuller, whose Irish Catholicism Since 1950: The Undoing of a Culture was a real breakthrough when first published in 2002, and Diarmuid Ferriter, who has also supplied indispensable commentary on how Vatican II was received in Ireland.

Notwithstanding these small reservations, there is definitely much admirable scholarship and useful information in this collection, which will be of definite interest to many who have lived with the after-effects of Vatican II.

Eamon Maher is Director of the National Centre for Franco-Irish Studies in IT Tallaght. His latest book, co-edited with Eugene O’Brien, From Galway to Cloyne, and Beyond: Tracing the Cultural Legacy of Irish Catholicism, will be published in 2016