Review: I’m Not Here to Give a Speech, by Gabriel García Márquez

This collection of speeches offers marvels of infectious charm and humanity, of a piece with the fiction, and equally haunting 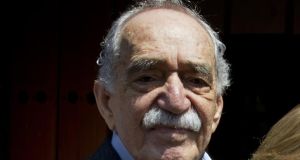 Book Title:
I'm Not Here To Give A Speech

At a literary festival in Colombia in January 2010 the travel writer Michael Jacobs encountered an elderly author with a wandering, glazed eye. To Jacobs it seemed impossible that this was the man who had consorted with Fidel Castro and Graham Greene. Even with his memory loss, however, Gabriel García Márquez radiated a statesmanlike allure; he beamed with nostalgia when Jacobs mentioned the Magdalena river, which had shadowed his Colombian childhood and become the setting for Love in the Time of Cholera and other marvellous late fictions.

Márquez’s birthplace of Aracataca, with its Afro-Hispanic dialect and “fragrant aroma” of guava fruit, is essentially Caribbean in its culture and outlook. Much of the fiction is redolent with twilight Caribbean amours and a peppery, hothouse hint of village scandal. Beneath the baroque, sun-drenched imagery, however, lurked darker themes. In One Hundred Years of Solitude, Márquez’s best-known novel, a mysterious “memory disease” afflicts the fictional village of Macondo. Had the novelist intuited something about his own condition in later life? (García Márquez died, on April 17th, 2014, of Alzheimer’s disease, at the age of 87.)

No Latin American writer was more influential. Back in the early 1970s paperback copies of One Hundred Years of Solitude appeared in student bedsits more dependably than rising damp and Deep Purple posters. Márquez’s “magic realist” masterwork went on to spawn countless imitations, but towards the end of his life he appeared to have grown weary of his fashionable example. Increasingly he turned to reportage – realism without the magic. News of a Kidnapping, a hybrid of reportage and courtroom testimonial, told of a real abduction by Colombian cocaine traffickers in Medellín.

I’m Not Here to Give a Speech

For all his celebrity Márquez remained averse to public speaking and banquet-hall awards ceremonies. In 1982 he turned up in Stockholm to collect his Nobel Prize in Literature dressed in a man-of-the-people bush jacket and pair of Cuban-heeled cowboy boots. (A dinner suit would not have become the strenuously populist “Gabo”.)

His Nobel acceptance speech, “The Solitude of Latin America”, included here, is suffused with leftist political idealism. From his “diehard liberal” grandfather, Col Nicolás Márquez, the novelist had inherited a lifelong adoration of Simón Bolívar, the Venezuela-born architect of Latin American independence (and, incidentally, the subject of Márquez’s superb late novel The General in his Labyrinth).

In 1816, as Márquez reminds us here, Bolívar raised an army in the former slave colony of Haiti to liberate Venezuela from Spanish oppression. It is not widely known that Venezuela owes its independence to Haiti, but Márquez affords black and mixed-race Haitians their rightful place in the history of Latin American emancipation.

After training as a lawyer Márquez worked as a journalist on Colombia’s liberal newspaper El Espectador, whose circulation doubled in 1955 thanks to his spellbinding 14-part account of a Colombian sailor’s ordeal on being swept off a destroyer into the shark-infested Caribbean. (The Story of a Shipwrecked Sailor, Márquez’s book-length account, ranks as one of the great works of literary reportage.)

In a speech he gave in Los Angeles in 1996 Márquez commends a Truman Capote-like reportage that employs the narrative devices of fiction and a creative immersion in the subject. Much of Márquez’s later work has an undertow of journalism. Chronicle of a Death Foretold, one of his most influential titles, continues to be referenced in newspaper headlines.

One Hundred Years of Solitude

His last published novel, Memories of My Melancholy Whores, about a nubile pubescent prostitute and her nonagenarian pander, heaved with allusions to Mozart, Chopin, César Franck, Schumann and Wagner. Márquez was the most musically sensuous of authors.

Repeatedly in these speeches he discourses on the “tragedy” of Latin America, whose wars, military coups and thwarted political idealism make it the “immense homeland of deluded men”. Márquez spoke from experience. His father, Gabriel Eligio García, had worked in Colombia in the 1920s for the United Fruit Company, which succeeded in reducing Honduras to such a state of corruption that it earned the original title of “banana republic”. In an extraordinary speech to a gathering of Colombian military in 1996 Márquez explains that his fascination with the corrupting tendency of power is “almost anthropological” in its obsessiveness and rigour. His mid-1970s masterpiece The Autumn of the Patriarch, about a vile Latin American despot, remains one of the great fictional explorations of power gone mad.

Márquez, the most famous writer in the Spanish-speaking world since Cervantes, has been well served by his long-standing translator Edith Grossman, who renders these speeches into marvels of infectious charm and humanity. It would be a mistake to consign I’m Not Here to Give a Speech to the frivolous pastures of the literary bagatelle. The book is of a piece with the fiction, and equally haunting.

Ian Thomson is the author of Bonjour Blanc: A Journey Through Haiti , published in an updated version by Vintage