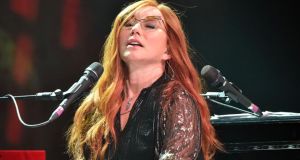 Tori Amos launched her career at the age of 13, performing at Mr Henry’s, a Washington DC gay bar for tips collected in a brandy snifter atop the piano. Her father, a Methodist minister, accompanied her to the gigs; at first, the customers mistook his clerical collar for fancy dress, Amos recalls in her new memoir, Resistance. Later in high school, she played smoke-filled piano bars near the White House that hosted the “liquid handshakes” of lobbyists. “Even though I was not aware of the details, I was a witness to something dark occurring.”

Resistance eschews the standard formula of the genre (“rise, bling, fall” as the hip-hop artist Questlove put it). Instead, it is loosely organised around 18 of what Amos considers her most political songs, including Cornflake Girl, Jackie’s Strength and Silent All These Years. Each track prompts a memory about what inspired the lyrics or a discourse on an issue close to her heart.

1 Keith Duggan: Bubba Wallace tweet shows just how troubled Donald Trump’s mind is
2 50 best Irish albums of all time – in order
3 Coronavirus: Two more deaths confirmed amid concern over new clusters
4 Cluster of Covid-19 infections at Kerry ‘house party’ investigated
5 Thandie Newton names names. Will Hollywood punish her?
6 Brightest comet of the century visible in Irish skies for the next week
7 Fintan O’Toole: In the US, the 19th century is coming to a very slow end
8 ‘At night I would go to my room to quietly drink.’ Irish women and addiction
9 Jack Charlton’s own grievances endeared him to Irish fans
10 Belgium helps Ireland to a Brexit boon
11 Monster or machine? Everything we know about coronavirus after six months
12 David McWilliams: The Pandession is destroying Ireland’s Craic Economy
13 Paschal Donohoe’s victory seen as a revolt against EU’s ‘big four’
14 Jack Charlton obituary: One of Ireland’s greatest adopted sons
15 Jack Charlton: Tributes paid to ‘sporting icon’ and ‘father figure’
16 Man (60s) killed as other driver ‘leaves scene’ of two-car crash
17 Dave Hannigan: Notre Dame’s Fighting Irish leprechaun needs its ass kicked
18 Jack Charlton’s tactics were divisive but he transformed Irish expectations
19 My marriage is boring and polite. How do I make my husband interested in me?
20 ‘My rent here is so low it’s a joke’
21 John Bolton on Trump’s presidency: ‘Every day is a new adventure’
22 This jewel of a gravel garden needs weeding just once a year
23 Can Grafton Street stop the flood of closures?
24 The Gael Becomes Irish: the prospects for the Irish language in Ireland today
25 Reopening of pubs that do not serve food may be delayed beyond July 20th
26 Covid-19: Cases rise in US, India as Australian spike leads to localised lockdown
27 Hillary without Bill? The Clintons’ alternative life
28 Capturing Irish hearts and falling asleep in the Vatican: Jack Charlton in his own words
29 Patrick Freyne: A very likable baby with a beard – it’s Zac Efron! – explores the world
30 Hazel Chu: ‘The Green Party needs new leadership and a system overhaul’
31 Johnny Depp: Ex-wife or friend defecated in bed in ‘fitting end’ to marriage, court hears
32 Children should not attend school while self-isolating after holidaying abroad
33 The movie quiz: ‘Jaws’ appeared in how many James Bond films?
34 South Dublin house vacated after 10-year-old row over bequest
35 Michael Collins’ grandniece welcomes decision to leave portrait in Taoiseach’s office
36 Our new restaurant critic’s first review
37 It’s time to end the Airbnb effect on Dublin’s housing supply
38 Bobby Storey: The IRA's planner and enforcer who stayed in the shadows
39 Many politicians remaining silent over online personal abuse
40 Non-wearers of masks on public transport face fine and jail sentence
Real news has value SUBSCRIBE