Book review: Brett Christophers is a prolific writer of sprawling, argumentative prose in this crackling thesis on a cruel economic order 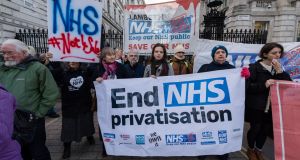 “Orientated around ‘owning’ rather than ‘doing’, there is nothing innovative or entrepreneurial about rentiership.” Photograph: Getty Images

Originally a French term, the rentier carries a vampiric odour, redolent of the Ancien Régime or the British landowning aristocracy: tapping gargantuan nourishment from the rent and toil of peasants on its vast estates.

The Irish Ascendancy were similarly perfumed by Maria Edgeworth’s novel, Castle Rackrent (1800), its crumbling pile mismanaged by the effete, dissolute family heirs. Decades before the Famine, “rackrent” became the catchphrase for brutally excessive rents extracted on pain of dispossession, perhaps even death on the roads.

10 Emma de Souza: My generation deserves to have its say on Irish unity now

12 Kremlin accuses US of backing anti-Putin rallies across Russia

15 Oscar Wilde, my grandfather, ‘talked himself into prison’

17 More than half in North want vote on a united Ireland, poll finds

19 Badge of distinction: Meet the first Sikh in the Garda Reserves

21 Chris Johns: If this is to be the last lockdown it must work

23 Conor McGregor stopped by Dustin Poirier in second round

25 A Kerala Kitchen curry for the weekend

29 My first year as a TD: ‘I felt like I was working in a blizzard’

31 Cliff Taylor: It's looking like a staycation once again in 2021

34 The chickpea stew that broke the internet in the US is here. Give it a go

38 Ireland’s lost golf courses: What happens when the gates close?

40 ‘Don’t write me off yet’: Conor McGregor to fight on after Poirier knockout