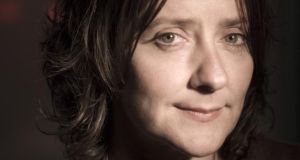 Eavan Boland’s A Woman Without a Country (Carcanet, £9.95) borrows its title and its epigraph from a declaration by Virginia Woolf in Three Guineas: “The outsider will say, ‘in fact, as a woman I have no country’.” It is a striking title for a writer of Boland’s prominence, who is routinely described as one of Ireland’s finest living writers (and would be a shoo-in if the State were to honour its greatest writers with a national undertaking such as the Pléiade project, in France, or the National Library in the United States).

Even more striking is Boland’s omission of the more hopeful projections of Woolf’s next sentences. (“As a woman I want no country. As a woman, my country is the whole world.”) But in the historical poems in her new book Boland’s title comes into focus as she describes the darkness that surrounded the lives of her predecessors. The title poem puns on the work of a 19th-century engraver, imagining his etching of a woman’s skeleton as a burial or silencing,

the rags of her skirt, her wrist

In a bony line forever

Her body from its native air until

She is ready for the page.

Boland does not “find a voice” for such figures: their country, she seems to argue, is a darkness that poems can register but not illuminate, a silence they must admit. If this seems like a grim prospectus, much of this excellent new collection is anything but.

“The hope is a story can stay open / with its anthem of small details singing, / its cup still on the dresser”, Boland writes in An Irish Georgic. And in her lyrics of contemporary life Boland supplies the lack she finds in historical accounts of earlier times. These poems observe a country changing and seek to preserve, among other things, “the fields stirring at night as they became // Memory and in the morning as they became / Ink” (The Lost Art of Letter-writing), “the discipline of yearning” occasioned by events at Ballinspittle (The Moving Statue) and, most memorably, scenes from motherhood, daughterhood, a long marriage.

Boland has rarely written so freely or with such enlivening playfulness as in these delineations of the present and the recent past. Mostly set between the Irish Sea and the Dublin hills, the poems take the measure of time passing:

The children shout out and I listen

To hear your voice with theirs, but no

How late the hour is, the birds almost up

And we smile at this

As we put the tray away,

Douse the fire and wash out the cups.

(Talking to my Daughter Late at Night)

And in Eurydice Speaks she writes a moving sequel of sorts to Love (a poem discussed in this newpaper by Colm Tóibín last weekend):

I stood at the window –

The hills darkening all around, saying,

As a shadow became a stride

And a raincoat was woven out of streetlight

I would know you anywhere.

September is a stock-taking month for Irish poetry, with the announcement of the Irish Times/Poetry Now and Strong Awards honouring the best books of 2013 and the run-up to 2014’s unusually open Forward Prize shortlist, which sets Colette Bryce, the Derry-born poet, against three older poets – John Burnside, Louise Gluck and Hugo Williams – as well as the London-based Jamaican poet Kei Miller.

Bryce prefaces her fourth collection, The Whole and Rain-Domed Universe (Picador, £9.99), which would be a worthy winner, with two striking and fitting epigraphs, one from a biography of Rimbaud – “he was attached to his starting place by a powerful piece of elastic” – and the other from DW Winnicott: “it is joy to be hidden but disaster not to be found”.

Accordingly, the book returns to Bryce’s “starting place”, the Derry childhood that provides the settings for the poems’ precise, slow-burning images. The opening poem, White, is a rich demonstration of Bryce’s skilful art, describing a tumble that quickly develops a slippery suggestiveness about its subject as its lines recede towards the left margin:

I slipped from my skis and stumbled in, like childhood,

for the sake of being caught

The poem may be describing a skiing accident , but it also describes happiness (which “writes white”) and a contented writer’s block (with snow figuring as the white page).

The poem then imagines sleeping “in my own shape, happily, / as the hare fits / to its form”, “warm / and safe // in a wordless place”, before rousing itself in the closing couplet with a winning play on the phrase “cold case”: “I placed myself in that cold case like an instrument into velvet / and slept.”

If White is a record of being lost, the next poem, Derry, revives that “cold case” and follows it with a MacNeice-like “placing” of the poet:

I was born between the Creggan and the Bogside

to the sounds of crowds and smashing glass

by the river Foyle with its suicides and riptides.

I thought that city was nothing less

than the whole and rain-domed universe.

This foundational poem establishes the ground for the rest of a very engaging and enjoyable collection, which pries at early memories and makes emblems of her childhood home, as when, in Hall Dream, Upended, “The privacy glass / in the old front door // seems to resemble / rippling water, // water / dimpling under rain”, at which point Bryce does indeed, as the title promised, upend perspective: “The only source of light / it pulls you forward // through a long-/ hall gloom. // Like bones drowned / in the bottom of a well // you re-assemble, / swim.”

The power of literature in a time of plague
5