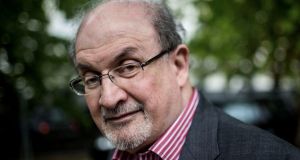 It takes an audacious author to decide that one of the greatest books ever written will be a guide and model for a new novel, updated for our time. Don Quixote, published in two parts, in 1605 and 1615, is the book Salman Rushdie decided to probe for ways in which contemporary US and Indian society might be examined and assessed. Given how well some parts of Cervantes’s work hold up – the speech of the shepherdess Marcela, for example, declaring why she will not be judged by her looks – and the overall beauty of the language detailing Don Quixote’s quests, it would be reasonable to expect that any author wishing to have their work compared to that great story would try to match the original work for depth of character, humour and coherence. Unfortunately, it doesn’t take long for Quichotte to seem heavy-handed and laborious by comparison.

The plot of Rushdie’s novel is convoluted and often inclined to trip itself up while reaching for a necessary piece of clarification. Central to it is the story of a pharmaceuticals salesman called Mr Smile Smile (the first of a series of irritating names characters are given) who adopts the persona of Quichotte and decides to carry out deeds which will endear him to a television star called Salma R (how the heart sinks on reading that name) and, despite a notable age difference, win her everlasting love. He is also keen to reconnect with his sister, known for no good reason as The Human Trampoline, with whom he fell out about the division of an inheritance.

1 Aaron Brady found guilty of capital murder of Det Garda Adrian Donohoe
2 New Zealand considers freight as possible source of new Covid-19 cluster
3 Covid-19 in Ireland: Colour-coded response set to replace phases
4 Donald Trump immediately targets Kamala Harris in campaign video
5 Brianna Parkins: Staycationing just means paying through the nose to sleep in someone else’s uncomfortable bed
6 Covid-19: Restrictions an attempt to prevent State going back to ‘beginning’
7 Michael McDowell: Free the Shelbourne Four from ‘woke’ activism
8 Supergarden sweeps to the sea in Balbriggan for €745k
9 Sunny spells forecast with high temperatures of 26 degrees
10 Ireland among countries urged to consider reinstating Covid-19 restrictions
11 Kamala Harris is the future, so Mike Pence may well be history
12 Coronavirus: Australia suffers deadliest day of pandemic
13 ‘Once you are not lily-white or freckle-skinned, you are labelled as non-Irish’
14 Kamala Harris: A trailblazing ‘fearless fighter for the little guy’
15 General Motors deprived of rising star after CFO’s surprise move to Stripe
16 Seán Moran: It won’t take much before cancelling All-Ireland looks like a solution
17 Moving in and out of lockdown is a recipe for economic disaster
18 Two fatalites feared as train derails in floods-hit area of Scotland
19 ‘Growing scepticism’ among publicans about September reopening
20 Madigan’s primary goal is Ireland caps after switch to Ulster
21 Kamala Harris an assured performer but past record faces scrutiny
22 Seat’s new Leon: It’s now better than the VW Golf it’s based on
23 Tesla to split shares to make stock less expensive for individual investors
24 UK economy slumps into deepest recession on record after 20% drop in GDP
25 ‘I’m afraid an intimate photo may be used to blackmail me or be sold to a porn site’
26 We emotionally reticent Irishmen would be even worse without sport
27 Standoff ensues over Minister’s unavailability at Covid committee
28 AIB concedes Covid mortgage policy was ‘regrettable’
29 An Garda Síochána criticised for Irish-language law non-compliance
30 A chronicle of dignity and despair
31 Harvey Norman targets Irish property developers
32 Brutalist beauty in Brittas for €495k
33 Lowest numbers in two weeks as one more Covid-19 related death and 35 new cases reported
34 My sporting disappointment: Battered, bloodied, broken by The Wall
35 Glanbia sees sharp decline in earnings due to Covid-19 crisis
36 Bridge on the River Kwai: ‘This film does not authentically portray the conduct of British officers’
37 Let us pursue the coronavirus - not just watch its R number wax and wane
38 KBC Ireland chief feels heat from big tech in race for relevance
39 Revised help-to-buy scheme opens for applications
40 The Irish Times view on resurgence of Covid-19 in Europe: adapting to the new normal
Real news has value SUBSCRIBE