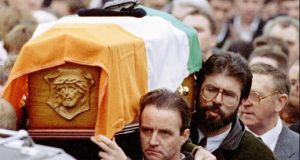 Interviewed by Deaglán de Bréadún, Martin McGuinness commented candidly that “what I want to see is Sinn Féin emerging as the largest party in the South. In that context then we can dictate terms in relation to the formation of a new government.”

Few observers will feel neutrally towards such a claim. For Sinn Féin continue to divide opinion sharply across (and even beyond) Ireland. There is now a long shelf of books on the party as it has evolved over many years. Power Play: The Rise of Modern Sinn Féin offers a valuable complement to what we already know, and it does so on the basis of lucid, first-hand analysis by an experienced journalist in the field.

The varied Sinn Féin cast list is helpfully introduced in the book. So de Bréadún devotes attention, for example, to Mary Lou McDonald (“a high-profile player in Republic of Ireland politics”), presenting her as loyal to Gerry Adams but open also to the idea of succeeding him as leader. McDonald’s rise in the party has been “rapid”, as de Bréadún points out in this very readable book, and he quotes her from 2004 as saying that “Sinn Féin is no safe haven for criminality”.

For many observers, of course, a genuine problem does exist here, and it is one reinforced by the 2015 Belfast killings of Gerard Davison and Kevin McGuigan, and allegations about IRA members’ involvement in the latter.

It is true that, in de Bréadún’s words, Sinn Féin is “no longer the propaganda voice of the ‘armed struggle’ carried out by the Provisional IRA”. And, in briskly rehearsing something of the Provisional IRA’s own story, the author deals calmly with Sinn Féin’s shift from being the lesser partner in an IRA-led struggle, to being the more dominant partner in a still not entirely muscle-free political movement.

Of relevance here is the chapter on Martin McGuinness himself (“From Rebel to Ruler”). As de Bréadún puts it, “Everyone involved in the Northern Ireland peace process has come a long way, but few have travelled farther than Martin McGuinness.” The interview material drawn on here regarding the North’s Deputy First Minister is fresh and interesting, and indeed the book offers lightly handled interview quotations from a good number of Sinn Féiners and their enemies.

Much of that controversial attention, of course, ends up being focused on the long-time and very significant party leader, Gerry Adams. According to De Bréadún, “It is almost certainly the case that, if a new leader or leaders from a different generation were to replace Gerry Adams, the party would have to endure a great deal less controversy in the political sphere and the media.”

I suspect that this is true (and Adams is too clever not to know this himself, of course). So Tony Blair’s former chief of staff, Jonathan Powell, is referred to in this book in relation to one key challenge facing Sinn Féin over coming years: the need to identify “successor leaders” who can take over in time from those who shifted from armed to less violent political methods.

But it is also true that, while the IRA’s violence did owe much to the leadership of Adams and McGuinness during the blood-stained years of conflict, so too the sullen peace now existing in Northern Ireland would not have arisen had they and their colleagues not decided to shift direction in a more peaceful manner. Both elements of their careers surely deserve to be recognised and remembered.

What of the future? Facing into future elections in the Republic, it would be naive to rule out too much in terms of possible coalitions. As de Bréadún says, “past experience shows that anything can happen when political power is at stake.”

And here there is an important paradox. One of the reasons for the republican movement abandoning its armed struggle was a recognition that most people in the South did not consider Irish unity to be a priority. Now, however, that lack of engagement in or enthusiasm for the North means that Southern voters are more prepared to ignore Sinn Féin’s brutal past, since most of them have never had much interest in the North in any case. Southern indifference towards Northern Ireland has therefore been the pivot on which Sinn Féin’s capacity in the Republic has been doubly reliant and emergent.

De Bréadún’s overall assessment is that, “whether we like it or not, Sinn Féin is now part of the mainstream political system: it is already in office in Northern Ireland and looks set to get into government in Dublin, sooner or later, which could have significant but unpredictable implications for the North-South dynamic on the island.” Certainly, being in government on both sides of the border looks more likely, as things stand, than does making the border disappear.

Deaglán de Bréadún has written perceptively in the past about the emergence of the Northern Irish peace process. This account of Sinn Féin helpfully details the fluid, contemporary role of one of the most contentious and important players in that political evolution.