Book indulges its writers too much, and requires the reader to plough through a wealth of unrelated and obscure, and very boring, material 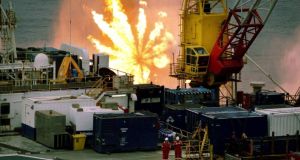 An oil rig operating in Barryroe, 50km from Co Cork. While 1,200 wells have been drilled in Norway, the figure for Ireland is 156. Photograph: PA

Book Title:
Own Our Oil, the Fight for Irish Economic Freedom.

Norway is the poster child for countries that have successfully managed the discovery of substantial oil reserves, and it is used in this book, and no doubt around the globe, as inspiration for what should be done in other jurisdictions.

Oil was discovered in Norwegian waters in 1969. Not only were the Norwegians lucky that substantial reserves existed, but the timing of the discovery was propitious given developments in the global oil market and other factors. Also, earlier in the 1960s, the Norwegians had given serious consideration to how they would entice foreign exploration companies to come to search for oil in their territorial waters, and to what their objectives should be if oil were discovered. They were prepared.

The key challenge was to get the right balance between incentivising the oil companies to come and drill wells in the first place, and ensuring that, if oil was found, the opportunity to get fair value from a national resource had not been given away.

Norway’s strategy involved very generous terms for the oil companies at the outset but, once oil had been discovered, the demands of the Norwegian authorities were increased. In an edited essay in this book, economic historian Helge Ryggvik says the key messages from the Norwegian experience are that not too much should be given away early in the process, time should be taken to set up a strong legal framework, and that that framework should be flexible enough to ensure the State can tighten the rules if the conditions change.

The Norwegians, as their oil finds developed, ensured that the oil was brought ashore (as against being piped direct from the wells to foreign markets), that a native oil industry developed, and that a large proportion of the profits from the oil went to the State. It also established Statoil, which gave the Norwegians clout in their dealings with multinational oil companies, and which has itself since gone on to become a multinational oil company (it has an interest in the Corrib gas development).

The objective of the whole exercise, as set out by the Norwegian government, was to secure the greatest possible share of the gains from oil for the State, which would distribute these in an egalitarian way across Norwegian society. It also was decided that the environment would be protected.

The Norwegians put aside a lot of the income from their oil and now have the world’s largest – and most transparent – sovereign wealth fund (worth more than $830 billion). Incidentally, Knut N Kjaer, a former chief executive of the massive Norwegian fund, is a member of the board, or commission, that oversees our own wealth fund, the now much-depleted National Pension Reserve Fund.

In this book, Own Our Oil, the Fight for Irish Economic Freedom , the Norwegian regime is contrasted with the one that exists in Ireland. It is outlined how in the mid-1970s the then energy minister, the late Justin Keating, introduced a regime influenced by the Norwegians and which included a 50 per cent corporation tax on profits, a 50 per cent share of any oil discovered, and a royalty rate of up to 16 per cent on any oil produced. In the 1980s, however, Ray Burke, as energy minister, announced that he wanted to incentivise drilling, and got rid of a lot of Keating’s terms. In 1992 the terms were further diluted, with energy minister Bobby Molloy and finance minister Bertie Ahern overseeing a drop in the corporation tax to, according to this book, the lowest then in existence for oil companies.

Fourteen essays
Own Our Oil is edited by Eddie Hobbs, who writes an introduction, epilogue and contributes to one of the 14 essays in the book. (There is also a poem). The essays are by different authors, who range from barristers to tax experts to documentary film-makers to historians ( A History of Irish Servitude , by Bill McSweeney). Hobbs is well-known as a broadcaster and adviser on consumer and financial affairs and is a founder director of Brendan Investments Pan European Property plc, a property investment project that raised approximately €13 million from investors in 2007, just as the property boom was coming to an end. In his introduction he says he was sure all the criticism of Ireland’s oil and gas regime was hot air produced by “extremists, lefties and planet-before-people types” until he had an epiphany in September 2012. His view now is that “we’d be better off leaving it in the ground rather than continue the current policy, which is to give it away for nothing or next to nothing”. It is a given in this book that Ireland’s regime is the most generous to the oil industry in the world.

The take the State would get from any oil and gas find has been considered by the Oireachtas Committee on Communications, Natural Resources and Agriculture, which recommended in May 2012 that the Irish regime be changed, so that a greater share goes to the State. Following on from this the Minister for Communications, Energy and Natural Resources, Pat Rabbitte, has appointed a firm of consultants, Wood Mackenzie, to report to him on whether the Irish regime is “fit for purpose”. On RTÉ’s Prime Time on March 3rd, he said that they will report back to him by the end of May.

“Strike rate”
Hobbs and others appeared on that programme, which heard Rabbitte argue that it is “nonsense” to compare Ireland with Norway. Oil companies have failed to find any oil here. The “strike rate” in Norway is about one well in four. While 1,200 wells have been drilled in Norway, the figure for Ireland is 156.

If the Irish regime is such a giveaway, why is there so little exploration, Rabbitte asked. On the crucial point of the State’s take from any find that might occur, he said that if oil is ever discovered here on the scale found in Norwegian waters, “then we will have Norwegian-type taxes”.

The Minister was less reassuring when he was asked whether, given what occurs with the Irish operations of Apple, Microsoft, Google and so on, we should be worried that if there was an oil find, there would be little by way of Irish-booked profits that would fall to be taxed by the Irish exchequer. Why should resources companies be treated differently to technology companies?, was his reply.

The striking point about the Prime Time item, which can be seen on Youtube, is that it is a million times more informative than this book, which indulges its writers too much, and requires the reader to plough through a wealth of unrelated and sometimes very obscure, and very boring, material, in order to find something relevant to the topic the book claims to be addressing. The livery of the book, and the title, attempt to couch the debate in emotional, nationalistic terms (the blurb on the back even says that a different resources regime could “potentially reposition Ireland from being an EU dependency”).

I was left wondering if the title was meant to remind older readers of Dan Breen’s My Fight for Irish Freedom . My late father had a copy of Breen’s book, which he hid on the top of his wardrobe. Presumably he was concerned that his children might be influenced by its depiction of political violence. But Breen’s book, unlike this one, was readable and to the point. Political engagement is crucial, but if you want to inform yourself about Ireland’s resources regime, I wouldn’t start with Own Our Oil.

A Beautiful Day in the Neighborhood: A tremendous film, a great young director
3