Written by the likes of RL Stine, these glossy, addictive thrillers sold 7m copies in their heyday, paving the way for today’s YA boom 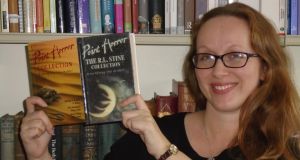 Beth Rodgers: For many, these books kick-started their lifelong love of reading

If you were a teen in the 1990s I challenge you to read the words “Point Horror” and not experience a chill of spooky nostalgia. The shiny, lurid covers with that distinctive Point Horror font, the glossy American settings, the read-them-in-one-sitting addictiveness of the chilling plots. Titles like The Babysitter, Teacher’s Pet, Trick or Treat, The Snowman and Beach House summon memories for a whole generation of readers.

This year marks the 25th anniversary of the Point Horror imprint. In 1991, the British base of Scholastic publishers decided to rebrand a set of horror titles sent by its American counterpart and thus Point Horror was born. Written by the likes of RL Stine (who would go on to pen the more enduring Goosebumps series for younger readers), Caroline B Cooney and Diane Hoh, Point Horror books arrived thick and fast in the mid-90s. That was one of the best things about them from the reader’s perspective – there were always more on the way. The series dominated the children’s book charts in the ’90s. At their height, upwards of 15 books were published annually, plus omnibus editions of the most popular titles. By 2000 they had sold in the region of 7 million copies. And then they seemed to fizzle out.

Where did they go – and why were they so beloved at the time? A recovering ’90s teen myself, I recently posed this question to friends and other fans of the books. Many were surprised to learn that Point Horror, like one of its own unfortunate heroines, didn’t survive to see the new millennium. For many, these books kick-started their lifelong love of reading. Several noted that they were gateways into the more adult frissons of Stephen King. My questions invoked affectionate memories of staying up until 4am on school nights to finish books, and of being told off for reading them at the dinner table – of being utterly terrified but reading on regardless.

For Eva McDermott, self-confessed Point Horror mega-fan, the glamorous American settings stand out as key to the brand’s image. I wonder if that was part of what made them so successful. Trick or Treat had me at the title – this was the larger, louder, scarier world I saw on American films and TV shows. RL Stine’s Beach Party opens with its teen heroine driving “the way she did everything else in life – foot down hard on the gas, full speed ahead, never look behind”. By the end of the first paragraph, she’s “slipped her navy-blue Mustang convertible into a narrow space in Lot C at LAX”. We didn’t get a lot of that in Co Down.

Some fans speculate that the rise of series fiction like Harry Potter, Twilight and the Hunger Games spelled the end for the short, standalone thrillers that were the Point Horror books. At under 200 pages a pop, they didn’t have space for the character development or extended story arcs possible in series fiction. Nor do they seem to have had the juvenile/adult crossover appeal of more famous YA franchises. It’s certainly true that Rowling’s boy wizard was ascending just as Point Horror was going the other way, but perhaps the Point Horrors were due a killing off for other reasons too.

After all, there’s another aspect to the glossy nature of the Point Horror world. As Eva recalls, almost everyone in these books was “white, rich, had summer cabins and winter lodges”. Did their lack of diversity, their one-note glossiness make their decline inevitable? They may have been partly responsible for laying the groundwork for YA fiction – they certainly demonstrated its commercial potential – but are these books perhaps best left in the shallow grave of the past? I’m not sure any of them can lay claim to complex and ironically self-conscious gender politics, either. Buffy the Vampire Slayer may arguably owe a debt to the plots of Point Horror books, but I don’t remember any heroine as iconic as Buffy Summers herself.

An honourable mention, where memorable heroines is concerned, is earned by Christopher Pike. Pike didn’t write Point Horrors but his books shared those garish covers and macabre plots and, for many fans, are indistinguishable in their memories of those reading years. When my friend Lisa Keogh and I were studying together at Queen’s University Belfast, we bonded over our shared love of Pike’s Remember Me trilogy, which tells the story of Shari, a teenage girl who wakes up to find she’s been murdered and must now solve the mystery of her death from the afterlife. It’s a ghost story, murder mystery and love story all rolled into one – death is no reason to give up on a crush after all. I recall daily trips to the local Easons to see if my order of the latest book had arrived. Point Horrors may largely have been consigned to boxes in attics, but Pike’s work is still very much alive for Lisa to this day: “I’ve re-read my copy of [Pike’s] Remember Me so many times the cover has fallen off. I have a small bookshelf for my most precious books – and Remember Me sits there with Persuasion, Jane Eyre and other great works of literature that I adore and have affected me.”

Austen, Brontë, Pike – together at last! I wouldn’t go as far as to say that Lisa and I were studying English because of Point Horror and Christopher Pike, but it’s certainly true that we were readers in part because of them.

The Point Horror books are not without their problems – style, politics, flimsy characterisation – but they got a whole generation of readers queuing up for books, swapping them with friends, and developing a love for reading that would last long past their teens. Their heyday may have been a quarter of a century ago, but their legacy continues to haunt many a modern-day reader.