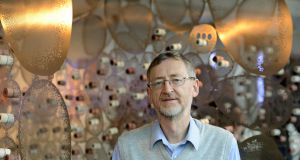 In the opening poem of Mark Roper’s collection Bindweed (Dedalus Press, 73pp, €12.50), the poet is imagining the conversation carried on by a flock of longtailed tits: “six or seven/or eight or nine or ten of them talking/all at once listen to me no you listen to me/no you listen no you a carry-on hidden/in trees a speaking of leaves is it . . . /”.

The poem serves as a reminder that in the general clamour of poetic voices competing for an ever-diminishing share of what is now called – horrifyingly – the attention economy, Roper’s voice remains level, calmly attentive, concerned less with its own formal qualities than with the things of this world to which it ascribes an absolute value. These include birds, animals, landscapes, and objects symbolising the points at which human culture and the ecosphere intersect.

“We keep going, though we are/all in some way wounded” one poem states; and this sense of vulnerability, both of the ecosystem and of the human creature – and of the fragile interdependence of both – pervades the collection. Several poems in the second half of the book describe a serious fall the poet had while walking in the mountains, but what is striking is the equanimity with which this experience is delineated.

Even in extremis, this voice retains its philosophical poise: “No blame for the place./No blame for myself./ I lay there open/as a daisy,//almost resenting/the helicopter,/the rescue it brought . . .’ Similarly Gravity is a hymn of resignation to the force to which he finds himself helplessly subjected: “it was only/your ancient will,/doing what it does, making/light of everything”.

Roper is not overly concerned with the technical or the meta-poetic and for the most part his technique is absolutely adequate to his intentions. A tendency towards Longley-esque inversion of word-order at the end of poems is a habit of diminishing returns that threatens to turn into a tic, but this is a minor formal quibble in a collection full of quiet pleasures. Water and Stone and Winter Solstice, Knockroe, an extended sequence and a tiny lyric, respectively, demonstrate the wonderful descriptive power Roper possesses at his alert and attentive best.

It’s a rare poem that can make a reviewer laugh out loud, but several of the poems in Iggy McGovern’s fourth collection, The Eyes of Isaac Newton (Dedalus Press, 77pp, €12.50) did just that. The moving To Seamus Heaney in Heaven, which describes the poet midway through a letter to Heaney when he receives the news of his death, contains one of McGovern’s best jokes: “And keeping to the last/the joke I knew you would enjoy,/the one about the Greek tailor:/Euripides? Eumenides?” The combination of tenderness and wit is characteristic, as is the experience of reading and enjoying the poem before realising it is a craftily constructed sonnet.

McGovern’s technical skill is of a piece with his humour: lightly worn and deftly handled. There is of course a strong formal element to wit, so it is no surprise that a craftsman of such dedication can make you laugh, but these poems also make you think: from the brilliant Parodies Lost in memory of Dennis O’Driscoll, to the economy of Memoir: “From Bisto to bistro/From Osmiroid to haemorrhoid/From shamrock to glam rock/From Alice Liddell to Alles Lidl . . .”

Elsewhere, there are nods to McGovern’s long career as a physicist. The title poem is a tribute to Newton, the greatest and “oddest of them all” and his understanding that “sight is ‘intromittist’ – light received/and not that light from their captains’ piercing eye/caused soldiers to shield theirs. . .” There is also a sequence of Quantum Clerihew (or should that be clerihews?) which somehow seem the perfect poetic vehicle for a discussion of Max Planck, Werner Heisenberg and the famously anti-poetic Paul Dirac, who is reputed to have remarked to Robert Oppenheimer: “they tell me you are writing poetry. I do not see how a man can work on the frontiers of physics and write poetry at the same time. . . In science you want to say something that nobody knew before, in words which everyone can understand. In poetry you are bound to say something that everybody knows already in words that nobody can understand.” Surely if the work of any poet is capable of providing a riposte to this intemperate remark it is Iggy McGovern’s.

There is no shortage of either emotional complexity or technical versatility in Conor O’Callaghan’s fifth collection, Live Streaming (The Gallery Press, 63pp, €11.95). Several of the shorter lyrics in the collection demonstrate a virtuoso handling of metre: the iambic dimeters of Appalachian Epithalamium scintillate, like champagne bubbles, with wit; the more sombre tetrameters of Trailer Park Études find O’Callaghan in contemplative mood. However, these shorter lyrics serve as bookends for the main event, which is an extraordinary 20-page tour-de-force of excoriating familial and self-examination, part prose poem, part dramatic interpolation, part transcription, entitled His Last Legs.

The notes to the text inform us that the piece is based in part on a once-popular “two-act farce” by the American William Bayle Bernard, whose protagonist was a stage-Irishman called “Felix O’Callaghan”. The poet’s choice of a farce as template for his collage/poem is not accidental, as that most clichéd of figures is also made to strut and fret here: the alcoholic, emotionally absent Irish father. The poem’s italicised sections comprise a transcription of a recording made while walking from room to room in his recently deceased father’s house. Like part of a crime-scene investigation, they are a pathetic inventory of familiar and unfamiliar objects, the disjecta membra of a wasted life. “There is nowhere to put grief”, the speaker observes at one point, and the piece demonstrates an awful fidelity to grief’s emotional switchbacks.

A particularly powerful section has the speaker, undone by his attempts to get the matter down, disconsolately recording his voice on a novelty toy, a “budgie which repeats your every word”. Disconcertingly, the budgie repeats his words back to him in a kind of exaggerated stage Irish: “I miss me feather”. It is hard to convey the power and pathos of this remarkable piece of work. Throughout, O’Callaghan’s voice is forensic, unreconciled, compulsively entertaining.

Caitríona O’Reilly is a poet and critic. She is from Wicklow and was educated at Trinity College Dublin, where she completed a PhD in American literature. She has published three collections of poetry with Bloodaxe Books and Wake Forest University Press: The Nowhere Birds (2001), The Sea Cabinet (2006) and Geis (2015). Her work has received both the Rooney Prize and the Irish Times Poetry Now Award. She is a former editor of Poetry Ireland Review. She lectures in poetry and lives in Lincolnshire. Caitríona joins John McAuliffe as chief poetry reviewer for The Irish Times. Their columns will appear in alternate months