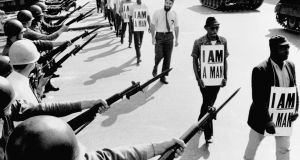 The title of Adam Rutherford’s new book, How to Argue with a Racist, is tempting and ticklish, though ultimately it’s not much more than literary clickbait, designed to entice browsers to pluck the book from a shop’s display table (perhaps pickbait would be a better term).

That is because, naturally, there is no mileage to be made in arguing with a racist; racism is illogical, and as Jonathan Swift recognised 300 years ago, “Reasoning will never make a Man correct an ill Opinion, which by Reasoning he never acquired.” This will not be news to anyone who has read Jonathan Haidt’s The Righteous Mind, which showed how hard it is for any of us to change our views about emotionally charged issues – or indeed to anyone who has foolishly ventured outside their filter bubble on social media.

1 Steve Coogan: ‘Come Out, Ye Black and Tans is two fingers to the British’
2 Anti-Irish bigotry in Britain has not gone away
3 Paul Flynn: How to cook the perfect chowder – don’t use flour and keep it simple
4 Parties to continue talks with Sinn Féin despite Drew Harris’s IRA comments
5 The view from Clondalkin: If Sinn Féin don’t get in, ‘there will be marches’
6 Pat Leahy: Fianna Fáil and Fine Gael will not crawl off and leave McDonald the stage
7 Fintan O’Toole: Irish voters' actions are not populist – just sensible
8 Ross O’Carroll-Kelly: ‘I just shake my head ... The dirty dog. The filthy hypocrite’
9 Ben Affleck: ‘It took me a long time to admit I am an alcoholic’
10 My debating days: By Michael D Higgins, Mary Harney, Dara Ó Briain and more
11 Drug dealer loses codes for €53.6m bitcoin accounts
12 30 great family holiday destinations in Ireland and abroad
13 L’Arche founder implicated in sexual abuse of women
14 England v Ireland preview: Ireland’s revival to face its sternest test
15 ‘IRA has gone away’: McDonald responds to Garda Commissioner’s comments
16 Homelessness crisis: Dublin hotel received over €4m last year for emergency housing
17 Teenager arrested after three-day barricade incident in Co Donegal
18 Who turned up to the Dublin casting call seeking ‘bone thin, amputees, crooked teeth’?
19 EastEnders reaches peak absurdity with a 35th anniversary shipwreck
20 Floods in the midlands: ‘If this was happening in Dublin it would be front-page news’
21 A Dad with brain cancer: I was given 18 months to live, it put things into perspective
22 Keith Duggan: Liverpool’s charming man casting a shadow over Guardiola
23 David McWilliams: Germany needs a new business model
24 ‘I joked about swapping bodies’: The story of a trans couple in Sligo
25 Irish pack must expose the weakness in England’s backrow
26 Coronavirus: Man dies in Italy becoming country’s first victim
27 Would you kill one person to save five? Depends if you’re a millennial or not
28 Do you have a Caroline Flack relationship with social media?
29 Keeping Donegal on the road to success a costly business
30 Jogger injured by galloping horse could face substantial legal bill
31 Matt Williams: Ireland will need to step up on Wales display to prevail at Twickers
32 Crowning Glory: Three pivotal Ireland games at Twickenham
33 Ireland Slam England at the Gardens to open up Grand ambitions
34 Jennifer O’Connell: Why are women in midlife so unhappy?
35 MV Alta: The unmanned voyage of the Ballycotton ‘ghost ship’
36 Steve Coogan says ‘my Irish passport will be arriving shortly’
37 Six Nations: Ireland v England all you need to know guide
38 Google completes purchase of Treasury Building for €120m
39 More than 25 people to sue over circulation of images taken at Dublin Garda station
40 Man arrested after shooting rifle in direction of gardaí in Co Donegal
Real news has value SUBSCRIBE