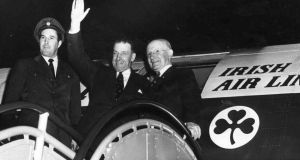 Seán Lemass with Capt WB Hill and Seán Leydon of Aerlínte Éireann in 1958: “It is not possible to determine now what our attitude would be if Britain did not acquire membership,” Mr Lemass wrote of the EEC.

After the end of the Great War 100 years ago, despite the service of perhaps a quarter-million Irish troops in the conflict, Ireland was excluded from the Versailles peace talks designed to agree the post-war settlement. In January 1919, the First Dáil issued a “Message to the Free Nations of the World” asserting Ireland’s right to a seat at the table of international affairs and its commitment to a new global order based on “freedom and justice”. Small nations could only be free if they had their own voice, and the creation of an independent and distinctive Irish foreign policy has been a painstaking process over the past century. The Brexit negotiations now present one of the greatest tests to that objective, making the release of the latest volume in the Royal Irish Academy’s Documents on Irish Foreign Policy series (covering 1957-61) particularly timely. Threads from that period form the background to the challenges of today.

Sixty years ago a fledgling Ireland only had resident missions to 15 countries (compared to over 70 today); the recognised Republic was barely a decade old, with UN membership only achieved in 1955. The official chief concern of Irish external affairs was what the State referred to as “the partition problem”. With frustrating customs checks and barriers to trade, the new government of Seán Lemass was keen to create a “free trade area” covering the whole island, but despite the obvious economic advantages on both sides of the Border, the northern government was frustratingly resistant. A 1961 department of external affairs memo lamented “the extraordinary persistence with which the Belfast administration refuses to envisage closer economic arrangements with us which do not apply to the United Kingdom as a whole”. In language eerily similar to today, Lemass summarised that northern unionists believed all-island free trade “would ‘draw a line round Northern Ireland goods, separating them from those made in Great Britain’, thus constituting ‘the first step in moving the Border to the Irish Sea’”.

1 Why you still can’t have a European holiday this summer. Or can you?
2 Donald Trump’s political success is based on racism
3 Oliver Callan: ‘I was a perfect candidate for exploitation’
4 The night shift: ‘In 38 years, I’d never seen an owl in the city centre’
5 David McWilliams: We won't have another 1980s-style recession
6 India overtakes Italy as sixth-worst country affected by Covid-19
7 Ireland earns ‘right to be hopeful’ again as Government fast-tracks plans to reopen country
8 Fintan O’Toole: The violence of racism is deeply embedded in American society
9 ‘White Irish people have never had to think about this’
10 Penneys announces it will reopen Irish stores next week
11 Tyrone midwife on the cover of Vogue magazine
12 Coronavirus: People to be allowed to travel anywhere in their county from Monday
13 Tianna Bartoletta: ‘After you’ve gotten your medal, you become black in America again’
14 Ross O’Carroll-Kelly: ‘We’re having a fancy dress porty. I’m going as the wife of a philanderer’
15 Why is Germany suddenly embracing its inner Keynesian?
16 Paul Flynn: ‘I still have all my old menus. One dish stands out: bang bang chicken’
17 Pubs reopening will not mean ‘fellas having a few pints and peanuts’, Holohan warns
18 Unlocking Ireland: What exactly will happen in reconfigured phase two on Monday?
19 We need to pay very close attention to what is happening in Britain now
20 Hosepipe ban looms: ‘We’re drinking tomorrow’s water today’
21 Irish parents on schools reopening abroad: ‘It has gone suprisingly smoothly’
22 Betting shops face uncertain future as they prepare for Monday reopening
23 Passengers face queuing in car parks at Dublin Airport
24 Donald Trump is in trouble, and that could spell very bad news
25 Plans lodged for demolition of The O’Rahilly house
26 Dublin nursing home to close as it ‘cannot meet regulatory requirements’
27 Covid-19 restrictions: What you still can’t do this weekend
28 All quiet on set: How do you make a TV drama in a crisis?
29 Cliff Taylor: Ireland steps on to a shaky financial tightrope
30 Family killed in US after plane crashes en route to funeral
31 Government formation: Greens blame ‘slow’ Fine Gael for talks paralysis
32 America is not broken, it was built this way
33 Coronavirus: UK scientists call for preparation for second wave
34 ‘Summer is not lost’ - Taoiseach announces accelerated easing of coronavirus restrictions
35 Do I want things to go back to normal? I’m not so sure I do
36 Tesla’s Elon Musk calls for breakup of Amazon in tweet
37 We should look at fundamentals rather than practicalities of reopening churches
38 Pat Leahy: Time for the parties to stop play-acting and decide
39 California police fatally shoot 22-year-old man on knees with hands up
40 Brother is dragging his heels as executor of uncle’s will - is there anything I can do?
Real news has value SUBSCRIBE