Our House Is on Fire: Greta Thunberg’s manifesto wants us to despair 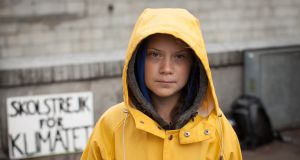 In August 2018, a girl with plaits sat on a blue cushion outside the Swedish houses of parliament holding a sign that said “skolstrejk för klimatet” – our world has not been the same since. The global school strike movement started on Greta Thunberg’s second day of protest, when a boy named Mayson sat down next to her. From then on, she has been joined by tens of thousands of other children all around the world.

Written primarily by Greta Thunberg’s mother, Malena Ernman, with sections by her father, Svante, and younger sister, Beata, Our House is on Fire: Scenes of a Family and a Planet is an unflinching look at both her family cosmos and the civilisation that it is embedded within.

1 Can I eat, drink, hug? How to visit a person’s house safely from June 8th
2 Former Kilkenny hurler dies after bike struck by tractor
3 How an exercise programme facilitated the spread of coronavirus
4 Why you still can’t have a European holiday this summer. Or can you?
5 Kenneth Branagh: ‘It’s a challenge, Irishness in cinema’
6 Tens of thousands march in US cities to protest against racial injustice
7 One of most powerful images of War of Independence
8 David McWilliams: We won't have another 1980s-style recession
9 My boyfriend of over a year hasn’t introduced me to his family. Should I keep waiting?
10 Oliver Callan: ‘I was a perfect candidate for exploitation’
11 Born in lockdown: The babies of the Covid-19 pandemic
12 Fintan O’Toole: The violence of racism is deeply embedded in American society
13 Juggling a newborn, a toddler and a daughter with special needs in lockdown
14 Protesters gather outside US embassy in Dublin over George Floyd death
15 Green Party’s Catherine Martin confirms she will stand against Eamon Ryan
16 Coronavirus: Brazil takes down Covid-19 data as death toll rises
17 Conor McGregor announces his latest UFC retirement on Twitter
18 Pubs reopening will not mean ‘fellas having a few pints and peanuts’, Holohan warns
19 Nine more deaths from Covid-19 recorded in Ireland along with 24 new cases
20 We need to pay very close attention to what is happening in Britain now
21 Teenager assaulted in Co Cork stabbing
22 Ross O’Carroll-Kelly: ‘We’re having a fancy dress porty. I’m going as the wife of a philanderer’
23 Irish parents on schools reopening abroad: ‘It has gone suprisingly smoothly’
24 Two officers charged with assaulting protester (75) in Buffalo
25 Unlocking Ireland: What exactly will happen in reconfigured phase two on Monday?
26 America is not broken, it was built this way
27 Aer Lingus confirms job cuts due to ‘decimation in demand’
28 Betting shops face uncertain future as they prepare for Monday reopening
29 NCT and driver theory test centres to reopen from Monday
30 Passengers face queuing in car parks at Dublin Airport
31 Dublin’s night workers: ‘In 38 years, I’d never seen an owl in the city centre’
32 Green-fingered garden is to dye for
33 ‘White Irish people have never had to think about this’
34 Why is Germany suddenly embracing its inner Keynesian?
35 Jimmy Gralton, the only Irishman ever deported from Ireland
36 ‘Get the eff out of this country’: Irish racism, as heard on Liveline
37 Paul Flynn: ‘I still have all my old menus. One dish stands out: bang bang chicken’
38 Irish abroad: Are you worried about when you can visit home again?
39 Coronavirus: People to be allowed to travel anywhere in their county from Monday
40 Donald Trump’s political success is based on racism
Real news has value SUBSCRIBE