On Getting Off: Sex and Philosophy – Going deeper 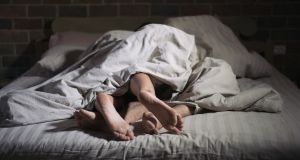 The author moves back and forth between accessible but formal language and the overtly crude. Photograph: Getty

Though things are certainly changing, there is some legitimacy to the stereotype of the physically detached philosopher, almost pridefully neglecting their body in the belief that doing so makes a grand statement about the strength and virility of their mind. You won’t find many philosophical works – at least not among the most historically valued – that include detailed discussions of sex acts, or devote significant words and thought to why some people are aroused by choking (it’s called asphyxophilia).

In On Getting Off: Sex and Philosophy, Damon Young, a philosopher based at the University of Melbourne, seeks to change that. He looks at every mechanical and vulgar aspect of sex that you might care to think of; not merely for the sake of it, but to answer central questions such as “What makes sex so funny?”, “Why are we captivated by nudity?” and “What do our sexual fantasies say about us?”

6 Fintan O’Toole: We had zero Covid and we blew it

11 David McWilliams: Why Ireland will recover faster than others

16 Jennifer O’Connell: The Government doesn’t trust us and it’s mutual

17 ‘We should have done better’: Cillian de Gascun, Paul Reid and Stephen Donnelly look back

26 Kate Winslet: ‘I shouldn’t have worked with Woody. I’ll always grapple with that regret’

33 Covid-19: Self-isolation rules to be eased for healthcare workers

34 Diarmaid Ferriter: We are being infantilised on Covid-19 by an immature Government

39 Thoroughly modern makeover on tucked away Ranelagh road for €950k

40 Q&A: What are the new coronavirus variants and should we be worried?