Of fiction, fission and fairies by Peadar O’Guilin

Inspired by memories of reading The Book of Conquests and crossing the fortified border en route to boarding school in the ’80s, YA debut The Call is a mix of the old and the new 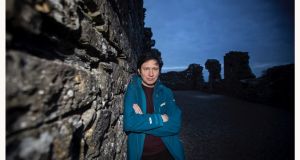 Peadar O’Guilin: If the first piece of inspiration for The Call came into my life decades ago when I picked up The Book of Conquests, the second was the famous scientific thought experiment known as “Schrödinger’s Cat”

You can apply atomic physics to fiction, yes, you can! Like bombs, good stories need a critical mass of ideas to bring to life. Two or more pieces of inspiration violently collide in the author’s skull, setting up a chain reaction of scenes and characters that arrive almost too quickly to jot down. And so it was for me, with my new novel, The Call.

The first inkling of it arrived decades ago, via Jim Fitzpatrick, and the gorgeous illustrations he did for The Book of Conquests. What schoolboy raised on Tolkien could resist? A month’s pocket money spent without regrets and years of fuel for an overactive imagination. I would think about these stories when I travelled from Letterkenny on dirty old buses to my boarding school in Kildare.

The Book of Conquests is only one possible translation of the title. A more literal rendering of the original, Lebor Gabála Érenn, would be The Book of the Taking of Ireland. It may sound clumsier, but it suits the content better – tales of all the people who ever migrated to, or invaded, or conquered our little island.

Back in the ’80s, with border checkpoints to slow my journey, and heavily armed soldiers stepping inside the bus, you could see they were fighting still.

So it’s no wonder that my mind seized on the story of the most fascinating of these peoples, the Tuatha Dé Danann, and their loss of what they called The Many-Coloured Land. How would they feel about those of us who now enjoy the beauty of their former home? Not good, I thought, looking at the watchtowers and the heavily-protected RUC stations. Not good at all.

And where did they end up, the Tuatha Dé Danann? Or, as we sometimes now call them, the Sí?

You’ll hear stories of The Blessed Isles and Tír na nÓg. But the Sí couldn’t have gone there, could they? They lost. In conflicts of this sort, the victors keep the best land for themselves and the losers get the same choice displaced peoples always get: Hell or Connaught. A strip of blasted wasteland, or a sucking bog where nothing grows but revenge.

And so, decades later, when I began writing The Call, which deals with the Sí and their hatred of us Irish, I created a place for them to live that would be the opposite in every way of the jewel on the edge of the Atlantic they once called home. This was The Grey Land and I designed it specifically to torture them. I’m not a cruel person, but stories thrive on conflict. I figured the more they despised the home into which our ancestors had pushed them, the hotter the fires of their hatred would burn.

The Grey Land is a monochrome hell. It had to be to make the Sí long for The Many-Coloured home they had lost. Ash falls instead of rain and even the air eats at the lungs and teases the throat with nausea.

I didn’t make it totally black and white, however. There are lava pits too, and I scattered a few “windows” over the new world, places where the exiles could watch their enemies enjoying the home that had been stolen from them. Like Abraham, the Sí can see the Promised Land, but never enter it.

But how then, were they they to exact revenge?

If the first piece of inspiration for The Call came into my life decades ago when I picked up The Book of Conquests, the second was the famous scientific thought experiment known as “Schrödinger’s Cat”.

The Sí can’t return to our world, but could they drag us into theirs? After all, we have Yeats and generations worth of folklore to tell us that the fairy folk enjoy a good kidnapping, especially where children are concerned. So, I decided we needed some abductions, and since this is a fantasy book, rather than a thriller, nobody could oblige me to stick to the laws of nature. The victims simply disappear, from anywhere, at any time. Their clothing falls to the floor and, as with the cat of the famous atomic physicist, nobody knows if they’re alive or dead, or worse, until they reappear a few minutes later.

I loved this idea. Imagine the tension characters must feel as they wait for a friend’s return! Counting down the seconds with a watch.

In my novel, this kidnapping, or “Call”, happens to every teenager on the island once in their lives. For three minutes and four seconds, they’re gone. Stolen away to the Grey Land, where, because time passes more slowly, they will spend an entire day being hunted down by the Sí. So many of them perish, that in the isolated Ireland of the story, the population has aged enormously and the State spends its limited resources training its children how to fight or to run from their terrible enemy.

But what if you can’t run?

Although a recent creation, my main character, Nessa, is rooted in the same nostalgia that keeps my love of The Book of Conquests alive. She takes a filthy bus from the same station in Letterkenny that featured so heavily in my own childhood. She crosses into Northern Ireland on her way to a boarding school, albeit one that teaches survival rather than rugby, and thinks about folklore and conquest along the way.

Unlike me, she suffered from a bout of childhood polio, leaving her lame. The Call will come for her as it does for everyone else, but nobody expects her to survive. She and the country she lives in appear to be doomed. I’ll leave you to find out how she gets on yourself.

As for me, I’ll be launching The Call on September 1st in Eason on O’Connell Street in Dublin. As it happens, this is the very same shop where all those years ago I first saw The Book of Conquests on the shelves.

The Call by Peadar O’Guilin is published in hardback by David Fickling Books on September 1st, at £10.99