Of All That Ends review: A fitting final farewell from Günter Grass 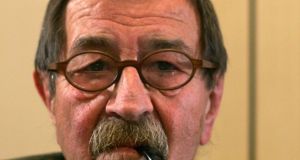 Book Title:
Of All That Ends

Always thinking, always musing, reflecting on the ordinary and the familiar, above all on the defining beauty of nature, the inimitable German fabulist Günter Grass, multi-talented artist, storyteller and witness, never tired of the business of living, not even as the end approached.

Here is a final book like no other; there is no sorrow, no self pity, just a rueful, yet characteristically, exuberant acceptance that for him time has almost run out and the message is clear – he has not quite finished with looking at the world, nor has he lost interest in expressing his opinions. This posthumous collection of mediations and snatches of memory is touching and witty, at times unnervingly philosophical. The master prepares to take his leave and, as always with Grass, not without an element of surprise and rakish panache, always the subversive aside.

“Who pulled the rug out from under my feet? Who denied the Yes still inside me?

“I’ve visited various places for the last time. Cities, landscapes, friends far away. Nothing I pick up proves easy to handle these days. Empty drawers. It’s time to practice my farewell . . . Farewell to spring potatoes and pears in the fall.”

Throughout a momentous literary career which began with the publication of The Tin Drum in 1959, his story of Germany’s tortuous history, a novel which was as radical as Joyce’s Ulysses, and culminated for Grass in the Nobel Prize in Literature, fittingly, the final one awarded in the 20th century, Grass always drew, painted and shaped things.

Art for him was second nature, his reflexive response.

The graceful soft pencil drawings accompanying his poems and prose pieces are as simple and direct as the thoughts expressed.

His subjects are birds, feathers, a broken egg shell; collections of leaves and nuts; roots, dried-out vegetables, pieces of wood, his own hands.

There is a crafted quality about the images, it is as if Grass the sculptor, who served his time as a stone mason, is paying tribute to the presence of a much earlier master, Albrecht Dürer, who also delighted in natural objects, the debris of the seasons.

With some ceremony he considers the potential future adventures of his final tooth: “As soon as he loses his grip, breaks off, or is pulled out root and all as a precautionary measure, I may cushion him in cotton wool and place him in a bottle along with a rolled-up letter, then throw him in my Baltic puddle as sea mail, where, aided by a favourable current, he may make his way through the Kattegat into the North Sea, and finally into the Atlantic, perhaps even round the Cape and reach the Pacific Ocean, to be washed up on the shore of a picture-book island. There he may delight the man, or the young woman of my sultry youthful dreams, who finds the bottle; the letter she will throw away.”

It is a tactile book aware of mortality, but it is also conversational in tone and rich in playful, blunt humour, which is lovingly conveyed by Breon Mitchell who, on Grass’s suggestion, re-translated The Tin Drum to mark the 50th anniversary of its publication.

In person, Grass could appear gruff and preoccupied, but he was also very funny, confident of his comic timing and an actor’s ability to deliver one-liners which weren’t easily forgotten.

There is a vibrant physicality about this book; it offers an insight into a sensual artistic imagination which was fully three-dimensional.

It is similar to experiencing the late works of Picasso with their aura of defiant energy.

In That’s By Me? he recalls being told about a cache of his early works on paper which had been discovered in a room he had once used as a studio: “They were done over sixty years ago, when I’d found a place to stay in the Caritas Hose in Düsseldorf and began my apprenticeship as a stonecutter and mason, then later as a student at the Art Academy: more than two hundred works, drawings and watercolours . . . Later I lived on Stockumer Kirchstrase . . . and I set up an atelier in the rear courtyard, in the attic of a stable that could be reached from the outside by metal stairs. And under those stairs, between bulk rubbish and worn-out mattresses, Ekkart Peliccioni, who took over my room, found a packet I’d forgotten all about in my haste to leave Dusseldorf.”

Grass recalls untying the string: “Musty old paper. Edges torn, dog-eared, mouse-eaten, stained, brittle. The drawings seemed so unfamiliar. ‘These are by me?’ Drawing after drawing revealed gaps in my memory.” He gazes at the portraits he once drew of old men and mentions is method of paying those models, “two cigarettes per session”.

The horde represents the tentative beginnings of an artist’s life but even more powerfully, the passage of time.

“Amazed, I rattled around in my memory, trying to find the young man in his early twenties” who had been his much younger self. “Who was I back then?” he asks, “What did I want to be or become? Who and what was left behind when I mounted the interzonal train to Berlin with my meager (sic) luggage – the midwife’s case stuffed with tools?”

As subtle and as delicate as the many feathers depicted through its pages, Of All That Ends is a glorious gift, a final salute true to the singular creativity of the most human, and humane, of artists.

Grass was not perfect, nor did he pretend to be.

From early in his career he addressed humanity with a knowing air of ‘we are all sinners together’. It is one of the many qualities, along with his highly visual imagination which makes his storytelling so alive.

There are many wonders, arresting observations and lyric images gathered here. At the heart of the volume though is the marvellous account of how he and his wife, Ute, began to plan their burials.

They commission a local craftsman to make their coffins, “pine for my wife, birch for me.”

The discussion is conducted at the kitchen table: “The conversation was down-to-earth at first, and dealt with practical details, but soon turned almost cheerful.”

The plans include having their bodies both resting on, and covered with leaves.

“At most our faces will be free, perhaps with rose petals on our closed eyes, a custom I witnessed during our stay in Calcutta . . . ” Grass’s soaring imagination was never at rest.

The boxes are duly made and delivered. They couple even try them out for comfort. Then they are stolen, only to be returned minus the dahlia bulbs Ute had been storing in hers, in anticipation of the spring.

Grass died aged 87 in 2015, on April 13th, the birthday of both Samuel Beckett and Seamus Heaney. He would have enjoyed that connection. Grass was an original and this beguiling leave taking most brilliantly testifies to that.

Eileen Battersby is Literary Correspondent. Her debut novel, Teethmarks on my Tongue (Dalkey Archive), is out now