Book review: Robert Gerwarth rescues the Weimar Republic from the ‘condescension’ of history 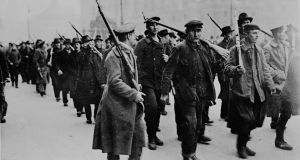 When my cohort studied the German revolution of 1918-1919 at Trinity in the late 1980s, the prevailing view was that the revolutionaries had been too German and not sufficiently revolutionary. Their failure to emasculate the “old elites” such as army, aristocracy, bureaucracy and big business, we learned, had stunted the young republic from birth. Worse, the incomplete revolution had paved the way for the rise of Nazism a decade later.

A great deal of research has been done since then, but the negative image has persisted. As recently as 2008, Oskar Lafontaine, at that time chairman of the radical left German party Die Linke, repeated that the “betrayal” of 1918 had “set the course for the disastrous history of the Weimar Republic”. It is therefore a breath of fresh air to read Robert Gerwarth’s authoritative new account, which is the latest product of a vibrant Dublin research hub on modern European history.

1 Covid-19: Cabinet looks to tighten travel restrictions and decide on pubs reopening
2 Social worker overcomes poverty to graduate with master’s degree
3 Vicky Phelan: ‘I hated being a mother – I would have gladly walked away from it’
4 Five Covid-19 clusters found among Irish fruit and vegetable growers
5 Dún Laoghaire home of renowned acting mentor Betty Ann Norton for €1.5m
6 David Trimble: After the big dinner in Oslo, somebody said why don’t we party together?
7 Seamus Mallon: I saw John Hume’s raw courage as he faced troop of bloodthirsty Paras
8 Why are there so many angry dads?
9 Fintan O’Toole: Supreme Court has called time on government waffle
10 Fine Gael Senator is threatened with violence on social media following canvassing post
11 Coronavirus: Warning against blame game as 46 more cases are confirmed
12 ‘I’ve had my butt kicked for the past three years’: Jamie Oliver on fame and failure
13 Coronavirus experience shows how Greece’s weakness is its sunshine
14 Maureen Dowd: The US president and the damage done
15 Owner of Dundrum Town Centre to sell prized assets
16 More than 40% of help-to-buy recipients already had deposit
17 Tony Blair: John Hume was a visionary titan who helped shape my politics
18 Netflix: 10 of the best new shows and films to watch in August
19 Cholesterol-lowering drugs may not have much benefit, review finds
20 Is that concealer you’re wearing, Mr President? The rise of men’s makeup
21 Elderly parents living in property you own will save you on capital gains tax
22 Tributes to John Hume flood in from Irish and international politicians
23 Niall Quinn and Brian Kerr differ on role of outsiders in FAI
24 John Hume, architect of peace process, dies aged 83
25 DUP’s Brexit ads: Who bankrolled the secretive £435,000 campaign?
26 John Hume obituary: Nationalist leader who championed ‘agreed Ireland’
27 More than 40 test positive for Covid-19 on Norwegian cruise ship
28 Most workers now expect ability to work from home part-time
29 Help-to-Buy bonus; a taste for working from home; and two landmark deals
30 ‘I’m pretty sure that if I had been somewhere else they would have just let me die’
31 Ethics watchdog backs staff called ‘lazy’ by FF’s Marc MacSharry
32 Former Spanish king to go into exile over financial allegations
33 Gerry Thornley: Irish system to face its acid test in front-loaded return
34 Australian state to deploy military, impose hefty fines to enforce Covid-19 isolation
35 Different Strokes: Bryson DeChambeau’s rules debates doing him no favours
36 Deadly virus should be treated like Covid-19 for hare population, junior minister says
37 Longford football team of 1968 still deserve special mention
38 Nine arrested following ‘shocking’ antisocial behaviour in Kilkee
39 24 hours in Bundoran: ‘The town is mental. No one expected it to be so busy’
40 Portuguese police disperse groups of young Irish holidaymakers
Real news has value SUBSCRIBE