Notes from the Cévennes: A love letter to French life 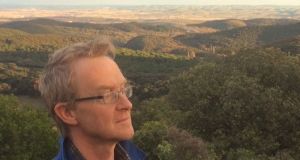 Adam Thorpe has been living in the foothills of the Cévennes in France since the early 1990s.

Book Title:
Notes from the Cévennes

It is a rare coincidence when a proper writer, a serious stylist, is sufficiently intimate with abroad to bring it to us in a form that is at once vivid and credible. Think those languid hours Henry James whiled away in Venice and Rome. Think Bruce Chatwin’s Patagonia or John Banville’s Prague. Adding Adam Thorpe to that catalogue does not flatter him unduly.

Thorpe is best known as a novelist. The adjective “underrated”, as a rule, tends to follow every mention of his name in print. It is not true. His first novel Ulverton is a polyphonic masterpiece and acknowledged as such by admirers as various as Hilary Mantel and Karl Ove Knausgård. His subsequent 10 novels, while winning little and appearing on few bestseller lists, have earned Thorpe the just reputation as one of the few writers other writers speak of in company and look to collectively for example.

Adam Thorpe has been living in a village in  the foothills of the Cévennes in France since the early 1990s, in a gorgeous higgledy-piggledy home (where this writer has stayed) made from several interlocking buildings parts of which date from as early as the Gallo Roman. His and his wife Jo’s two sons naturalised and went to school there, and their daughter is even native Nîmoise.

Notes from the Cévennes, adapted and expanded from an occasional column in the Times Literary Supplement, is Thorpe’s account of la vie Languedocienne. It is rich and wise and funny and overall deeply pleasurable. Its timing could not be more apposite. Coming as it does when British isolationism is rampant once again and the nations of mainland Europe each ponder their own reactionary options, this is effectively a cri-de-coeur on behalf of humanistic pluralism from one who has truly inhabited the liminal quandary of dual citizenship and appreciates its true weight.

Those who know Thorpe’s writing will recognise his core concerns: history and the physical world, and more particularly how the former continues to reveal itself in the latter. Here, a few remaining mulberries speak of a silk industry that once thrived in this corner of the Languedoc. Mutilated fleurs-de-lys in the hinges of revolution-era shutters recall an age when any evidence of royalism might be punishable by death. The wolves encroaching in ever-increasing numbers from the higher slopes bring eerie echoes of occupying SS troops who adopted the wolf as part of their menacing iconography. Those troops are still remembered by older Cévenols. Happily, wolves remain oblivious to our self-absorbed versions of them. “The wolf doesn’t obey boundaries,” Thorpe writes. “Its limits are those of its own survival.”

As we might expect from a novelist, character is brilliantly realised. There is Alain the boulanger who vanishes a whole week and gets searched for by helicopter and is eventually discovered bourré near his van in Nîmes; Hemingway in the bullfighting amphitheatre and Picasso patronising the bar across the street and Baywatch’s Pamela Anderson protesting at the entrance; Elie the one-eyed goatherd who holidays in India but tells his sister he is visiting Picardy and phones each day to say how cold it is; Leon, the local autodidact who lectures the author on Guillaume le Conquérant over pastis in the tabac. Best of all is Madame Mourier, the late malign peasant neighbour who was rumoured (falsely) to have murdered her husband and left a witchcraft poppet full of spike punctures in the Thorpes’ barn.

The past is never simply the past. It is also the myriad ironies of our attempts to recreate it. At one point a film crew colonises the village, and resigns all the businesses since the extant signs are deemed insufficiently authentic. The film crew’s ersatz signs have remained ever since, so long that nobody can tell original from faux. Then the post office gets slated for closure due to dwindling demand. The resulting overnight picket is a gesture of fidelity to France’s tradition of public protest. The postmaster requests he be imprisoned in a back room for fear of looking too passive to his superiors, and the protesters hover in the street discussing the quality of wine being passed around.

The house Thorpe’s family has inhabited becomes the ultimate metaphor for the persistence of history, its surfaces and the words we have for it. The steps are lined where former inhabitants sharpened their knives. Smudges in a Roman tile are miraculously revealed, thanks to a mould made of pasta dough, to be the print of a child’s hand from nigh on two millennia ago.

There are several books about the Cévennes, most notably those by Robert Louis Stevenson and Geoffrey Grigson. Notes from the Cévennes is a worthy addition to that library, and a sight better than most in this vein. It is beautifully written and produced, a pure pleasure: learned and attentive and rich in description and full of humour that is genuinely affectionate without being remotely patronising. The contemporary reader wishing to learn more about this impoverished and fascinating backwater of ancient Occitania, and about France more generally, could do worse than starting here.