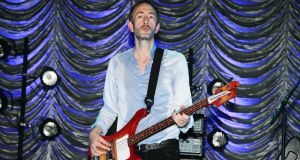 The Ruins is Suede bass player Mat Osman’s first novel, and what an expansively imagined, astonishingly beautiful piece of work it is. Photograph: Visual China Group via Getty

Fifteen years ago, Raymond Chandler’s damning verdict on the traditional Golden Age mystery – “If it started out to be about real people, they must very soon do unreal things in order to form the artificial pattern required by the plot. When they did unreal things, they ceased to be real themselves” – was still pretty much taken for granted in crime writing circles, and writers who persisted in that mode were disparaged for writing “cosies’”.

Dashiell Hammett had taken murder out of the Venetian vase and dropped it into the alley, and the hard boiled revolution led by these two men had an irrevocable influence on writers who believed crime fiction could and should be about more than “an exhausting concatenation of insignificant clues”. (It should be said that a great deal of this critique was often heavily gendered: in his history of the genre, Bloody Murder, Julian Symons thought it sufficiently devastating to condemn Gaudy Night by Dorothy L Sayers as “essentially a ‘women’s novel’”.)

1 In six months we will be in the grip of a 1980s-style recession
2 Sweden should have done more to combat coronavirus, health chief says
3 With Lincoln looking on, the crowd dropped to their knees as 7pm approached
4 Michael McDowell: Black Americans fear the future and so should we
5 Luke ‘Ming’ Flanagan bares his bottom half to European Parliament
6 Coronavirus: 25% of new cases arising in the community with no known link to other cases
7 Angela Merkel sweeps in to save the euro zone
8 Diarmaid Ferriter: 1920 was a year of violence, trauma and terror in Ireland
9 Church of England rules Irish inscription on grave stone must have translation
10 Easing restrictions: What exactly will happen next Monday?
11 Aer Lingus wants quarantine period axed to resume flights in July
12 Normal People: Full-frontal nudity was not its most radical feature
13 Are we there yet? The seven sticking points in government formation talks
14 Trudeau lost for words when asked about clearing of protesters for Trump photo
15 Róisín Ingle: My body has seized up while in lockdown
16 Jacob Stockdale gives keyboard warriors the slip in textbook fashion
17 Google facing $5bn lawsuit for tracking in ‘private’ mode
18 Remote working: Ending the lunacy of pointless commutes
19 Co Mayo community grieves for Ben Duffy (5) after Lough Mask tragedy
20 Irish holidaymakers will not be barred from Greece when tourism restarts
21 Normal People: The origins of Connell and Marianne
22 Deloitte expands into cloud computing with deal for DNM
23 ‘Did I miss anything?’ A modern Rip Van Winkle emerges, blinking, into lockdown
24 Unemployment rate remains at near record 26.1% in May
25 ‘Tralee felt friendlier than Killarney. We discovered a different welcome there’
26 Gardaí move against cyber crime, prostitution gang in Dublin
27 More than 200 people contracted Covid-19 while in hospital for other conditions
28 More than 2m people use website that shows lockdown distance limits
29 Programme for government must include 'fiscal responsibility' – Varadkar
30 George Floyd: US protesters defy curfew as demonstrations over killing rage on
31 Gardaí investigate Dublin Black Lives Matter protest over Covid-19 rule breach
32 Bank of England tells banks to get ready for no-deal Brexit
33 Should my mam wait for house prices to drop before buying?
34 Pinterest seeks new office for Dublin EMEA headquarters expansion
35 Do I want things to go back to normal? I’m not so sure I do
36 Inequality, not racism, has been institutionalised in the US
37 Coronavirus: Speed limits to be cut to 30km/h across Dublin City Council roads
38 We need to pay very close attention to what is happening in Britain now
39 IRA disappearances during the Irish revolution
40 Paddy Raff: Comedy star of the coronavirus lockdown
Real news has value SUBSCRIBE