Neither Cautious Nor Careful – by Áine Eastwood, age 17 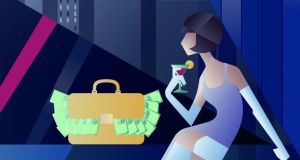 The year was 1923, right in the middle of the Roaring Twenties. The stock market was booming, wealth was soaring beyond imagination and jazz music was growing, spreading like an infectious, musical disease as young people jumped from club to club like fleas to dogs. Caution and care were almost forgotten concepts, except to uptight mothers and more uptight grandmothers, replaced by wild parties and alcohol, short skirts and car crashes.

The streetlights lit the otherwise pitch-dark street in a dull yellow hue, flies flitting in and out in no direction. The moon was a silver sliver in the sky, which was stark and sparse, not a star to be seen. The cold cut through your average New Yorker trotting down the street, slicing through any man-made barrier that presented itself, from sheer shawls to thick coats.

Melanie waited by the third street lamp down, no exception to the frosty forces at play. She stood with her back against the black iron, caring not about the stains and smudges it could make on her caramel- coloured coat. She had more pressing issues than that.

She closed her eyes, her ebony eyelashes coated in mascara resting against her porcelain cheek, and tried to lose herself in the piano music coming from the club behind her. The notes ascended and descended scales in a rapid fashion. Melanie had no knowledge of musical theory, nor did she care to, but the melody from behind the wall gave her a feeling she couldn’t quite place her finger on.

She waited a while longer, subconsciously tapping her gloved finger to the beat and straining to hear over the sound of drunken sobs and shouts and demands for encores. All too soon, she was jerked from her peaceful state by a tap on the shoulder.

“Melanie Adams?” a voice asked from behind. A deep voice, a man’s voice; gruff from the cold or simply gruff by nature. She didn’t care which.

“Well done,” she replied without turning to look at her new companion. “Was that your first guess?” A hint of a smile twitched at her rose-coloured lips.

“Lucky guess,” he replied. “To some people, you stand out quite a bit.”

“Do I now? I should work on that.” She didn’t have to ask who these people were. Before he could say anything she turned on her heel to face him.

The man was a head taller than she would have been had she not worn her heels. Given that she had taken that precaution, her brown eyes looked directly into his green ones. He was broad-shouldered, thick-necked and had a large moustache. She deduced that he was at least in his forties. His eyes flickered over her and in the glow of the street lamp she saw a sneer creep onto his face.

“Shall we get down to business?” she asked. “Out of the cold, preferably.”

“Yes,” he grunted. Melanie felt a small tug of satisfaction. One thing she had learned from early on in life; men hate having their power taken away.

She stalked into the club, him hot on her heels. Any other night, she would have loved to sit at one of the tables and immerse herself in the pianos, saxophones and drums that gave out those toe-tapping tunes. However, business came first. She led him to a table in the corner of the room, hidden in the shadows. She took a seat and gestured for him to do likewise.

“Let’s see it then,” he demanded, his eyes alight with enthusiasm.

Melanie whipped her treasure out of her coat pocket and held it between them. A blue diamond, the size of the palm of her hand, rested in it, with a silver chain skimming the scummy surface of their table. His mouth dropped open, giving her a surge of pride, and he reached out to take it.

“You asked to see it,” she said, placing it in her pocket. “Now hold up your end.” He scowled and she returned it with a sweet smile. He lifted his beaten leather briefcase and placed it on the table. Before he could, she undid the straps and opened it, seeing piles of crisp bills inside.

“How much?” she asked, keeping her tone bored. She had played this game for long, long years and she had become more than just a player; she had become a winner.

She pursed her lips, cocking her head to the side. $15,000. Not bad. Not bad at all. Drumming her fingers on the table, she took a quick glance at her companion’s face. His brow was furrowed in impatience. She leaned over the table, her face now inches from his.

“What?” He spluttered. “No deal?” Leaning back in her chair, Melanie gave a contented smirk.

“I risked my neck to get that diamond, you don’t think I’d check its worth? This is $30,000, sir, and I’d expect that or none in return.” She rose from her chair, bobbed a curtsey and turned to leave. She made three steps before . . .

She sat back down, leaning her chin on her hand.

“You drive a hard bargain, Adams.” He reached into his thick coat and pulled out piles of more money tied up with elastic bands. “$30,000.”

Melanie nodded, satisfied, and took the money and briefcase, stuffing the notes into her pockets.

She reached into her left pocket and took out the diamond. Eyes aglow with lust, Arthur’s man snatched it up, a smile spreading across his face, showing his yellowing teeth.

“Now, if I may?” she asked, gesturing to the stage.

“Go ahead, Miss Adams. ” He rose to leave. “You’re a tough nut.” He left, making his way through crowds of swaying, intoxicated youngsters to the door.

Now that her business was concluded, Melanie reclined in her chair, relaxing to the sounds of piano notes getting higher and higher, and frantic violin sounds; the weight of $30,000 in her pockets, along with the real diamond.

A winner. That was Melanie Adams.