Book review: Stephan Malinowski on the German nobility’s role in the destruction of democracy 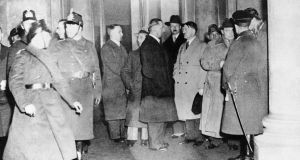 For the past few years a rather unusual restitution debate has been making waves in Germany. At the centre of the controversy is Georg Friedrich, Prince of Prussia, head of the House of Hohenzollern that ruled Imperial Germany until the last Kaiser, Wilhelm II, was forced to abdicate following the November Revolution in 1918.

While the Hohenzollern family was allowed to keep most of its considerable assets in 1918, its fortunes changed in 1945 when the Red Army conquered the eastern half of Germany and nationalised their lands, castles and possessions.

6 Covid-19: We have never seen a pandemic of this scale that was shorter than 2-3 years

13 How Enter The Dragon became a martial arts phenomenon

17 Bill Gates: ‘I’m not trying to take anything away from Greta Thunberg, but...’

22 A musician’s suicide: ‘Gar would be alive today if there wasn’t a pandemic’

24 Fatal chance brought together an unlikely killer and his victim

31 Dublin most popular city for Brexit relocations by financial firms

37 Large majority of over-85s will get first vaccine by end of this week, Donnelly says