Mr Wilder & Me: Tricksy tribute to the film world

Book review: Jonathan Coe’s usual cohort of fans may be bemused by the inconsistent style and tone 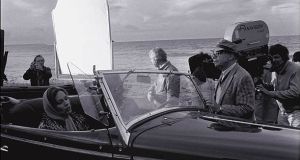 Actor Marthe Keller and director Billy Wilder during the filming of Fedora in Cherbourg, France in 1977. Photograph: Michel Lambert/Gamma-Rapho via Getty Images

In a 2002 feature piece for the Observer Magazine, British writer Jonathan Coe revealed that his biggest influence wasn’t a fellow novelist, but film director Billy Wilder. It was the combination of “desperate sadness” and “unapologetic levity”, the “lurch from comedy to pathos”, that shaped Coe’s own artistic consciousness, he wrote. His seminal experience with Wilder’s work was The Private Life of Sherlock Holmes (1970) , an affectionate send-up of Arthur Conan Doyle’s famous detective.

This is significant information for anyone approaching Mr Wilder & Me, whose subtitle might well be The Adventures of a Greek Interpreter, one of Conan Doyle’s favourite Holmes stories. Late in his novel, Coe drops the title into a conversation between Wilder and the book’s narrator, Calista, an aimless Greek student with musical flair who finds herself drawn into the film world when she is employed as an interpreter to the director and assistant to his collaborator, IAL Diamond, on the set of Wilder’s penultimate film, Fedora (1978).

1 Late Late Toy Show duet with musical hero ‘absolutely mad’ says delighted teen
2 Coronavirus: 243 more cases, seven further deaths reported in the State
3 Ireland’s teenage pariahs: ‘We are really at breaking point now’
4 Waterford turn Kilkenny upside down and inside out
5 Tom Barry showed great military expertise, says historian
6 ‘I don’t need to do any of this. . .I don’t actually need to work.’
7 Late Late Toy Show: Music, tears, Tubridy’s F-bomb and €5m for charity. What a night!
8 400 – yes, 400! – Irish retailers for all your online Christmas shopping
9 Man arrested over murder of Seema Banu and her two children
10 Ireland in precarious position as third Covid-19 wave could be more deadly, Nphet warns
11 Will Europe shut down its ski resorts this winter?
12 Sordid murder of hurling brothers still resonates in south Galway
13 David McWilliams: We need to reinvent our empty city car parks
14 US court rejects Trump’s attempt to block Biden win in Pennsylvania
15 'It just doesn’t feel safe': The restaurants that will not reopen in 2020
16 Jim McGuinness: There is a way to save championship and make it competitive
17 Shot, bayoneted and clubbed: the ruthless lengths the IRA went to at Kilmichael
18 More than €6 million raised during RTÉ Late Late Toy Show
19 Aoife Noonan’s How to be a Better Baker Part 5: Fruity tea loaf
20 Hotels, retail, hairdressers, churches, gyms to open next Tuesday
21 Fintan O’Toole: To counter vaccine sceptics, we must understand them
22 Klopp furious as injuries mount and VAR decisions prove costly
23 Brexit: UK seeks to strip EU fishermen of 80% of fish caught in British waters
24 Holidaymakers should avoid booking sites and go direct, survey says
25 Waterford’s frenzied waves of attacks too much for Kilkenny
26 Older men’s fixation with younger women really boils my kidneys
27 My pet and me: ‘They just make everything better’
28 Basic income for all: Has the Covid crisis given us a new economic model?
29 Penneys reopens and plans for 39 consecutive hours next week
30 Astronaut Chris Hadfield offers to ‘talk space’ with Adam from the Toy Show
31 Ex-barrister Patrick Russell conned people out of more than €12m, gardaí say
32 Best books for Christmas 2020: Fiction, biography, sport and kids’ books
33 Breda O’Brien: Data collection on abortion is a travesty
34 Republic to move back to Level 3 as shops open from Tuesday
35 The kitchen smells of rum. Either my old dear is over or Sorcha’s baking a Christmas cake
36 I yearn like a hungry dog for a camouflage Dryrobe
37 A live performance beats livestreaming every time
38 Viggo Mortensen: It ‘felt awkward’ replacing Stuart Townsend in Lord of the Rings
39 One man dies, five injured after partial building collapse in Tralee
40 Ryanair customers may face charges of up to €100 to cash refund cheques
Real news has value SUBSCRIBE