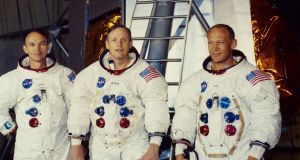 Astronauts Michael Collins, Neil Armstrong and Edwin ‘Buzz’ Aldrin, the crew of the lunar module Apollo 11, stand in front of a test module before their historic flight. Photograph: MPI/Getty

One of the more rueful passages in Barack Obama’s volume of presidential memoirs is a controversy that attracted little attention outside of the US. The Obama administration supported the solar and wind sector during the financial crisis. Solyndra, a solar panel company, received a $535 million loan. Their product became uncompetitive, the company failed and the loan was lost. Allegations of severe mismanagement were made. Recriminations were loud and politically damaging.

8 My Bloody Valentine: Very loud, very fuzzy, and heading back to their Irish studio

9 Ken Early: It’s time for Alexander-Arnold to move to the middle

10 We would drop to our knees after our tea of soda bread, country butter and hang sandwiches

13 Q&A: Which Level 5 restrictions are being lifted from today?

17 School homework: Does it have any benefit at all?

25 Elon Musk: Grimes and I have this debate of ‘Are you more crazy than me?’

26 Leaders are failing the young people of Northern Ireland

29 Sean Bean: ‘The mango sex scene was a new level of weirdness’

30 Harry and Meghan: The union of two great houses, the Windsors and the Celebrities, is complete

35 Mary Coughlan revisits her past: ‘It was everywhere. Bags of cocaine, champagne and tequila’

37 The Irish Times view on Covid-19 laws and guidance: an unacceptable blurring of lines