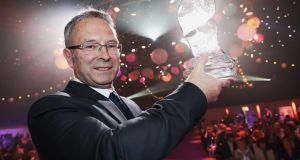 Irish author Mike McCormack won the €100,000 International Dublin Literary Award earlier this week for his novel Solar Bones, published by Tramp Press. “Formally ambitious, stylistically dauntless and linguistically spirited,” the judges’ citation declared, “Solar Bones is a novel of extraordinary assurance and scope.” If not quite a rags to riches story, it is a tale of recognition and renown after a career of great early promise was derailed by rejection by mainstream publishers.

In the Society of Authors’ awards announcements, Valerie O’Riordan and Chris Connolly were shortlisted for the Tom-Gallon Trust Award for short stories; and Yes by Anne Patterson, from Co Armagh, was shortlisted for the McKitterick Prize awarded to a first novel by a writer over 40. The four prizes will be awarded at the Authors’ Awards on July 19th.

11 ‘Doug and Kamala together are almost vomit-inducingly cute and couply’: The VP’s stepkids speak

13 The night-time noise in my house is giving me sleepless nights. What can I do?

17 Focus intensifies on impact of tiny plastics on human body

20 ‘Brexodus’ of jobs from City of London to continue, says EU commissioner

23 What’s the story behind the mystery of Easter Island? It’s not set in stone

24 C&C challenged, an ‘abyss’ in the North, and Joe Biden’s tech agenda

31 ‘The hellhole says goodbye’: Glee and relief in Europe as Trump departs

34 What are Joe Biden’s Irish roots?

40 Baked spuds get a tasty, crunchy filling and topping