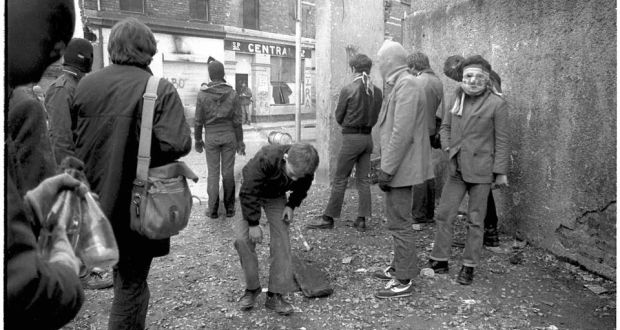 Many of Hillen’s subjects are unaware of the camera, with only the odd person, often a child, staring him down.

Introducing Melancholy Witness, Hillen describes beginning this photo series as an artistic endeavour which ended up in a history book. Burnt-out buses, balaclava-hidden faces and rubble-strewn streets is the world Hillen chose to document. What he actually captures, however, is the intensely human aspect of a war which was fought in every community throughout the North. Protestant women, finely dressed, are shown standing outside their homes watching an Orange Order parade march by. Catholic children are caught running up a hillside to a Mass rock. A chance, perhaps, to explore in a way that wasn’t allowed at home.

Accompanying each image is Hillen’s personal account. The simplistic, matter-of-fact tone he adopts to describe the day the image was taken or the slight intricacies that stand out to him only adds to the images. The title, taken from a Seamus Heaney quote on Hillen, perfectly captures the work. Many of Hillen’s subjects are unaware of the camera, with only the odd person, often a child, staring him down. It is the violence which is striking but it is these faces which are memorable.