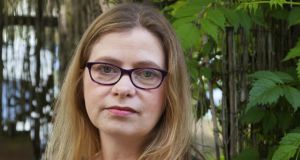 You’d have to feel sorry for Mam. It couldn’t have been easy having to tie her son to a chair for his own good and to be always stuffing teapots with written accounts of what had happened. There was also her self-doubt, and all the ambivalence, the concern, the anger and the feeling of wanting to run away from the responsibility.

You won’t have forgotten Martin John. He’s the psychiatric patient in Malarky, Anakana Schofield’s debut novel. Poor old Martin John, totally bonkers, obsessed with listing facts about Beirut, a place to which he’s never been. Yes, that patient, a character potentially too interesting to close the door on.

Schofield didn’t and here he is, as demented as before, twice as large and inhabiting an even better novel. Martin John is best described as a comic tour de force sustained by theatrical energy as well as linguistic and tonal cohesion. It should be adapted for stage; most comedians would donate their organs in exchange for a fraction of the gags, never mind Schofield’s assured timing.

The story gets better and better as it proceeds in its wry, cryptic style. No one will want this novel to end, although it would be good to know if Martin John had renounced doing “it”.

Be warned: regardless of one’s views on sexual deviants who prey on women and who also get their kicks out of sustaining a very full bladder, Martin John will make you ill with laughing but also guilty for smiling at a human tragedy, which it is.

Many writers have brazenly wandered into the minefield of mental illness, but few with Schofield’s peculiar decency and candour in not only depicting Martin John’s scheming turmoil, but also the bewildered righteousness of those surrounding him. He is supposed to disgust us. And, yet, what must it be like to be inside his broken, semi-innocent, semi-corrupt mind?

They always tell you they are just like you.

They always tell you they know how you feel

In one of the many brilliant set pieces, Martin John prepares to fight to the death over the last copy of a daily newspaper because it contains a Eurovision Song Contest supplement. He is hauled off still clutching the paper. Later, he is distressed on discovering that his evil, loud music playing tenant, the Baldy Conscience, has taken to using Martin John’s treasured Eurovision archive in place of conventional toilet paper.

Do and don’t know

The gods, it appears, are against him – and with anti-social impulses such as his he needs all the help he can get. The problem, as Schofield stresses as a refrain throughout, is “What They Don’t Know”, which frequently outweighs “What They Do Know.”

Prepare to run a mile from Martin John, the pervert who fumbles with his clothing and exposes its contents, then stop and wonder at the unfortunate creature that collects Eurovision cuttings and memorabilia, and then read on in the hope that there is someone out there who can rescue him from himself.

The most confident saviour to emerge is an angry born-again Christian who works in a railway station, “at the French-themed bakery that the majority of passengers trek by to purchase food at the burger and chips joint beside it and her name is Mary and she is devout”.

By the time Mary enters the narrative, Martin John, having escaped his current place of imprisonment and still wearing his hospital gown, is hiding under a train. Only he is not hiding – everyone knows he is there, causing a major disruption of the rail services.

“Word moves around the station that there’s a man barricaded himself down by the train. The Holyhead train. All sorts of descriptions fly. He’s barmy, wearing a hat, he has a weapon, he might already be dead or electrocuted . . . The NHS is failing mental cases. Thatcher is responsible . . . You don’t know who is going to randomly stab you these days. A woman wearing a camel-coloured coat knew a woman who killed a man because she thought he was Satan. Or maybe that wasn’t it. Maybe he’d been violently abusing her for years . . . One fella just says run him over if he’s stupid enough to lie down . . . I wish I had the time to throw myself in front of a train, another exhales. And there’s the one quiet person always who pretends not to hear or notice because that’s the person whose uncle went into the river when the quiet person was fourteen.”

All Martin John wants is for the station to be cleared so he can do his circuits around it. Mary is convinced she alone can persuade him to come out, thus ensuring she will be “airlifted to glory”. It doesn’t quite go to plan, but she is pleased with the outcome. As for the Mam, well, spare a thought for her.

Comparisons have been made with Beckett and Pynchon, but Martin John is closer to Nabokov’s Lolita and John Kennedy Toole’s Pulitzer Prize-winning classic A Confederacy of Dunces. Schofield’s black vision is darker and all her own. I love the humour and the disciplined rhythms of her plain, exact prose, as well as the audacious panache.

It remains a mystery why Canada’s Giller Prize jury chose Andre Alexis’s Fifteen Dogs over Martin John, but there will be more than enough award panels and readers eager to throw laurels at Anakana Schofield’s feet.