Marriage in Ireland 1660-1925: lifting the veil on Irish couples 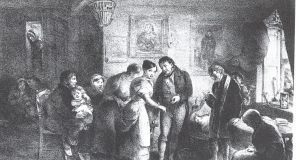 The only known contemporary image of a marriage solemnised in a private house. Daniel O’Connell in the background suggests a date in the 1840s. Painted by Joseph Patrick Haverty RHA (1794-1864). Permission of Claudia Kinmonth.

Thus Sammy Cahn’s sardonic version of arguably the most powerful institution in the world, made popular in the 1950s by Frank Sinatra who clearly believed in marriage since he did it so often.

1 Son putting elderly dad under pressure to sign over land
2 Joe Biden does not want to see guarded Border in Ireland after Brexit
3 Stir-crazy Dutch holidaymakers set to descend on Caribbean island
4 Bloomberg ranks New Zealand top in fight against Covid-19 - but how did Ireland fare?
5 Covid-19: Museums, cinemas set to reopen next week as Varadkar warns of New Year restrictions
6 Shops, hairdressers and hotels expected to reopen next week
7 Alison Curtis: My guilt at not going for a second pregnancy
8 Kathy Sheridan: Dozens of agendas come into play when RTÉ drops its guard
9 BOI customers to be charged twice with bank fees on New Year’s Eve
10 Family in court dispute over hotels in Dublin and Galway
11 How much damage might your money be doing on Black Friday?
12 Miriam Lord: Unity and common purpose in spades but not for Covid fight
13 Kevin McStay: Maybe a knockout All-Ireland Championship is the long-term solution?
14 Tánaiste says third short period of Covid-19 restrictions may be needed in New Year
15 Covid-19 response: Has Level 5 been worth the cost?
16 Somebody needs to explain sovereignty to Johnson before it is too late
17 Ed Byrne, Johnny Sexton and Rob Henshaw to miss clash with Georgia
18 How to gift your child a house deposit . . . tax free
19 400 – yes, 400! – Irish retailers for all your online Christmas shopping
20 The Irish ice-cream maker who was diagnosed with diabetes
21 The beginning of the end: 10 things to know about Covid-19 vaccines
22 Mixed-origin products pose Brexit talks difficulty
23 Ryanair warns it may reduce more Irish services and relocate operations
24 Michael McDowell: Let us redesign to draw desperately needed people back to our cities
25 Irish tax policy is now a human rights issue for the UN
26 Planning failures put nature ‘under unprecedented pressure’
27 Stripe in talks for new funding at much higher valuation
28 Michael J Fox: ‘In the wheelchair, I’m luggage. No one listens to luggage’
29 Cannabis grower’s first crop so bad she could not give away, court hears
30 Canary Islands struggle to cope with dramatic surge in migrants
31 Opposition withdraw from Dáil business committee as McEntee row deepens
32 Presidential transition officially starts as Trump bows to the inevitable
33 Gerry Thornley: Ireland don’t want to box themselves into a corner
34 Irish designer of Oxford vaccine: ‘I’ve never worked so hard in my life’
35 Workers have little idea of the cost of retirement income
36 Fintan O’Toole: Our Government should be a fox. It is actually a snake
37 Grammys 2021: Fontaines DC get best rock album nomination as Beyoncé leads way
38 Face masks don’t impede exercise ... except for one type
39 Boeing seeks dismissal of Norwegian Air’s €1bn lawsuit over Max aircraft
40 Minister for Housing to ban new co-living developments
Real news has value SUBSCRIBE