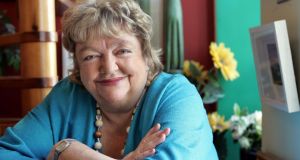 Maeve’s Times is funny and clever and kind, which are excellent qualities in both books and people. I’ve spent a lot of time over the past few days trying to think of the best way to open this review, and then I remembered what Maeve Binchy herself wrote in 1983, in a piece entitled “Develop Your Own Style”, which is one of more than 90 pieces collected in this new book: “If you are having difficulty beginning something . . . an article, a short story, a novel or a play . . . ask yourself, ‘What am I trying to say?’ Then say it aloud and nine times out of 10 you’ll have your first sentence.” So that’s what I did.

In “Develop Your Own Style”, Binchy writes of the importance of writing in a natural, unaffected way. But natural should never be confused with unsophisticated or unskilled, and what this wonderful collection of her work for this paper from 1964 to 2011 makes abundantly clear is that she was a superb journalist.

She began writing for The Irish Times when she was still working as a teacher, and became the paper’s women’s editor in 1968. In 1973 she moved to London, where she continued to write features and columns.

In her acknowledgements, the collection’s editor, Irish Times journalist Róisín Ingle, rightly points out that from her earliest pieces, Binchy’s writing voice seemed fully evolved. Not only did she have the ability to perfectly evoke a scene, a personality or even a national mood in just a few hundred words, but she could write pieces so perfectly crafted that they filled me with a sort of envious delight.


Opening lines
Almost every piece in the book begins with the sort of opening line that many journalists lie awake at night trying to create. Binchy never goes for a lazy cliche or a trite phrase, and she always grabs the reader. Take this opener, from 1976: “I was nearly the co-author of a best-selling pornographic book, and sometimes when I stand in the rain waiting for a non-existent bus and unable to afford the taxis that come by empty and warm and comfortable, I think that it was very feeble of me not to have gone ahead with the project.”

Who wouldn’t want to read more?

Her friendliness towards and interest in total strangers radiates from almost every page, and provides her with some of the book’s most entertaining stories. There’s her encounter with a man who has accidentally settled in to wait for a friend in a corner of a hotel’s ladies’ cloakroom (he thought it was a quiet alcove that just happened to have a mirror in it). And I particularly loved her bus-stop conversation with a woman who didn’t share her happiness at the new law legalising the sale of contraceptives.

Unsurprisingly, this is a very funny book; Binchy could make pretty much anything hilarious, from having one’s photograph taken to going to hospital. But it’s not all fun. Binchy’s writing has often been viewed, mostly by people with only the most cursory acquaintance with her novels, as cosy. But she never shied away from dark subjects in her fiction, and she didn’t do so in her journalism either. She wrote about abortion and poverty and loneliness and cruelty and our inability to deal honestly with death.

She did so without sentiment and with great compassion. Her report on the capsizing of the ferry Herald of Free Enterprise at Zeebrugge in 1987, in which she goes to the ferry terminal in Dover where the families of those aboard wait for news of their relatives, is a masterclass in how to capture the terrible effect of a tragedy on those left behind without poking a microphone in their faces or intruding on their grief.

She also highlighted serious problems by pointing out those who are trying to change things for the better. In “A Tipperary Robin Hood”, she shows the grim effects of Margaret Thatcher’s policies on older people by looking at a Tipperary-born social worker in London who does her impressive and imaginative best to make her aging clients’ lives easier. It’s a brilliant approach that doesn’t ignore the realities of lonely, impoverished old age but reminds the reader that there’s still hope for change.

While many of the pieces are personal tales, the book is a reminder of how good a reporter she was. As well as the Zeebrugge disaster, there are her accounts of civilian suffering in wartorn Cyprus and the protests at Greenham Common, her encounters with Charlie Haughey and Samuel Beckett, and her witty accounts of every royal wedding from Princess Anne’s to Kate and William’s. These reports are short but so evocative and insightful.

Of course, some pieces in the book have stood the test of time better than others. A series of 1970s pieces called Women Are Fools, which tell the stories of individual women who weren’t satisfied with their lot and suffered as a result, may have aimed to highlight the limitations placed on Irish women’s lives, but some of them now read like rather trite morality tales. But even those stories are gripping narratives, and their slight datedness merely highlights how well everything else stands up.

Anyone who has read Binchy’s novels will be familiar with her subtle but strong feminism, and it’s evident throughout these pieces. Sometimes it’s explicit, as in the hilarious story of her attempt to pay for a male friend’s lunch (“The waiter took my cheque and cheque card like a butler in a film might pick up a tousled gypsy child to remove it from his lordship’s eyes”), or her evaluation of Margaret Thatcher (“She has almost single-handedly banished the notion that it is somehow unusual or special for a woman to be able to do anything. For that, if nothing else, women in the future may thank her”).

But it’s always implicit in the way she writes about women’s lives, including her own. As Irish women’s lives were gradually transformed over the last few decades of the 20th century, Binchy constantly provided the voice of quietly radical common sense. This book is a reminder of how important that voice was. She doesn’t say anything in “Develop Your Own Style” about how to end a review, but I’ll trust that her advice to simply write what you want to say still holds. So this is how I’ll end it: thank you, Maeve. Thank you very much.