Máire T Robinson: Sheela-na-gigs and writing what you don’t know

I see now why I chose to write about sheela-na-gigs: to explore obliquely themes of body image, pregnancy, motherhood and societal expectations of women 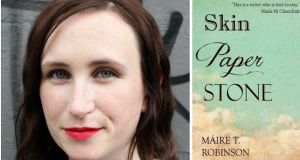 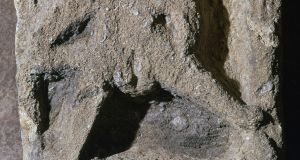 “I realised how marginalised sheela-na-gigs were from mainstream culture after Skin, Paper, Stone was published when one reader marvelled at my imaginative powers in inventing them. They were once such an important part of life in Ireland that they were literally part of the buildings.” Photograph: CM Dixon/Print Collector/Getty Images

Write what you know is an oft-quoted piece of advice, but also one that is highly subjective. Taken at face value, it could suggest that we write about our own experiences verbatim, creating fiction that is barely-disguised biography. Alternatively, it could be interpreted in a more nuanced way – a suggestion to use some element of personal experience as a starting point, but to then exaggerate, distort or amplify this detail through the lens of fiction. Generally, I ignore write what you know altogether. Instead I opt for my own mantra: write what you don’t know yet, but want to find out. Not as catchy, I’ll admit.

For me, the joy of writing is in the discovery. I never start by deciding I want to write about a particular issue, theme, or emotion. Often, the story will develop to become an exploration of these things but I’m not consciously aware of them, at least in the beginning. I start with the characters and everything else springs from there. I’m not writing what I know. I’m setting off down an unfamiliar path and discovering what I don’t know, what I’m intrigued by, and what I’m seeking to discover.

So it was that I found myself on one such unexpected path when writing my novel Skin, Paper, Stone. For reasons that weren’t entirely clear to me at the time, I decided that Stevie, one of my main characters, was a medieval historian who was researching sheela-na-gigs. For the uninitiated, sheela-na-gigs are a seeming anomaly in Irish history. They are stone carvings with large, skull-like heads who stand or squat in an act of display, thighs spread, and one or both hands pointing to an exaggerated vulva.

From the eleventh to the seventeenth century, these lewd figures provided an incongruous image as they brazenly reclined over the entrances to religious buildings and defensive structures. Following a papal decree in the seventeenth century, many were removed. However, in the years that followed, sheela-na-gigs were discovered buried in graveyards or concealed in walls or gate pillars, suggesting local people held them in high esteem and were reluctant to follow the orders of the church to destroy them. Today, many are housed in the National Museum in Dublin, while others can still be seen in situ around the country (although sadly some are now damaged or weather-worn).

I didn’t know a whole lot about sheela-na-gigs before I started writing the novel. It helped that my main character was not an expert on the subject either. Stevie was at the start of her research journey, and her study of sheela-na-gigs mirrored my own quest to understand more about them.

There are many theories about the purpose of sheela-na-gigs. One such theory claims they had a talismanic function, that their presence at entrances to sacred buildings prevented evil spirits from crossing the threshold. Another suggests that they provided a visual warning to the illiterate against the sin of lust, like similar imagery of female exhibitionists found in Romanesque-style churches in western France, Normandy, and Spain around the same era. They may have represented a Celtic goddess such as the hag-like Cailleach from Irish and Scottish mythology, where an assimilation of pagan artefacts was necessary to placate the superstitious during the change from the Pagan worship of several gods to the Christian worship of one. It’s also possible that they served a number of functions, or that their function started as one thing and evolved over time to another.

Of all the theories, the one that most captured my imagination was explored by Barbara Freitag in her book Sheela-na-gigs: Unravelling an Enigma (Routledge, 2004). She suggests that sheela-na-gigs were used to aid women during pregnancy and childbirth. Many of the figures were found in small rural churches, and the quality of the stonework varied greatly, suggesting they were not the work of skilled craftsmen but that of amateur carvers, placing them in the realm of local tradition. Women of childbearing age in the medieval period would have spent much of their adult lives either pregnant or nursing infant children, only to bury a large number of these offspring who died from malnutrition or disease. Risks to women during pregnancy and labour would also have been high. It seems fitting that these experiences would somehow be ritualised and have evolved to incorporate totems or charms for protection.

Looking back on it now, I can see why I chose to write about sheela-na-gigs in Skin, Paper, Stone. It gave me the opportunity to explore themes of body image, pregnancy, motherhood and societal expectations of women, but to do so obliquely rather than overtly. Stevie is at an age when her friends are starting to have babies: “A sure sign that she was getting older … was that when her friends told her they were pregnant, the first thing she said was congratulations rather than oh fuck, what are you gonna do?” For Stevie, the sheela-na-gigs tie in with a teenage eating disorder, her relationship towards her own body, and her ambiguous feelings towards motherhood.

Stevie meets and falls in love with Kavanagh, a charismatic but dispirited painter who dreams of becoming a tattoo artist and moving to Thailand. He is flippant about the figures when he first encounters them: “So … are they basically like giant vaginas?” However, they begin to have a profound effect, even on him. He discovers that they have entered his consciousness when he is inspired to paint again and they appear on the canvas: “luring him in, yet simultaneously keeping him out, inviting him to understand, and then backing away before he has a chance to.” In this way they remind him of Stevie in ways he can’t quite pinpoint. He starts to reassess his other relationships with women. A chance encounter with an old girlfriend leads him to fully acknowledge the impact of a teen pregnancy he took no responsibility for at the time. He also begins to see a different side to his mother’s identity, the woman she was before she became a wife and mother.

Skin, Paper, Stone takes place in a recessionary Ireland where the usual markers of success have been turned on their head. During her research, Stevie stays in a pristine and barren hotel, “one of those Celtic Tiger follies, built back in the time when people took weekend breaks to rural idylls just for the hell of it”. In this landscape where the shiny and new have failed a generation, it makes sense that they would look to the past, like Stevie does in her research, “at the secrets in the moss-covered stone waiting to be revealed,” or to idealise elsewhere and the illusion of escape as Kavanagh does with his dreams of moving to Thailand.

I realised how marginalised sheela-na-gigs were from mainstream culture after Skin, Paper, Stone was published when one reader marvelled at my imaginative powers in inventing them. Another told me that he had searched for them on Google images and was shocked at receiving “quite the eyeful”. Therein lies the contradictory power of sheela-na-gigs. They were once such an important part of life in Ireland that they were literally part of the buildings. Now they have been sidelined to relative obscurity.

In academic writings on sheela-na-gigs, words like “enigma” and “mystery” permeate. Are these images of the feminine as monstrous, or as divine? Given the ambiguity, sheela-na-gigs now inhabit a space in which they can be viewed as either. Over the course of her studies, Stevie comes to accept this inherent mystery, hinting at a new outlook in her own life. This is the beauty of sheela-na-gigs. We are not dealing in absolutes. We are in a glorious, grey area where nobody has claim to them. They are there for us to each interpret and celebrate in our own way. In this way, they are much like the creative process itself.

I’m still not an expert on sheela-na-gigs. I suspect that I’ll never be an expert on anything except my own curiosity. However, I’ll continue to follow my instincts – unravelling the threads that fascinate me, scavenging for shiny objects and gleaming ideas to feather my nest. I’m often asked what my advice for aspiring writers would be. So, here it is: try leaving write what you know aside. Instead, embrace what you don’t know. Write what you want to find out. Write what fascinates you, troubles you, terrifies you. Make your way down an unfamiliar path and see where it leads – to the monstrous, to the divine, or maybe even to both.