Informative, engaging study of how bringing up babies is influenced by economic forces 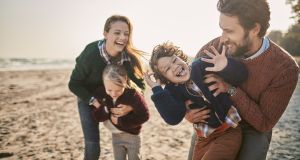 The authors of this absorbing and well-argued book have laid bare the nexus between parenting decisions, economic systems and inequality. Photograph: Getty

Parents everywhere are operating under multiple stresses. It is clear the pandemic will expand existing inequalities, increasing social stress and fragmentation in society with subsequent effects on children and parents.

While the importance of parenting is clearly recognised by most people, the incentives and constraints that influence parenting behaviour are not so clearly understood. Indeed parenting has become even more complex as families react and adjust to the new realities of pandemic life. The crisis has starkly exposed how precariously families on low incomes live.

At first glance, a tome on parenting by two male professors of economics does not appear to be a must-read at this critical point in time. Yet this informative and engaging explanation of how child rearing is influenced and shaped by cultural and economic forces is very readable. It is not another manual on the dos and don’ts of parenting but rather an attempt to explain why parenting choices may differ among parents who live in the same society. The authors, a German and an Italian, draw on some of their own family experiences to illustrate how parenting can change over time and adjust to different socio-economic circumstances. The core argument put forward by the authors is that economic conditions, how equal or unequal a society is, have an important impact on parenting practices and on what is regarded as good parenting. Considered through the prism of economics, parenting, like any other human endeavour, is subject to financial constraints.

Parenting style, a developmental psychology concept referring to the approach adopted by parents to raising their children, is informed by what kind of skills, competencies and attributes parents think will be required by their offspring to succeed in life. One of the most influential typologies of parenting style originated in the work of Diana Baumrind a developmental psychologist of the University of California, Berkeley. She identified three main parenting styles: authoritarian, permissive and authoritative. An authoritarian parent will rule, control and monitor their children’s behaviour. Discipline, often administered by corporal punishment, instils obedience and compliance. Permissive parents adopt a hands-off, less controlling approach to child rearing. They promote self-reliance and independence by letting children make their own choices. An authoritative parent seeks to direct and influence their child’s choices by persuasion and argument. Historically the authoritarian style dominated child-rearing practices until the early 1960s. Declining inequality led to permissive parenting and the demise of authoritarianism.

Changes in technology created opportunities for independent, well-educated children to gain well-paid employment. However, as levels of inequality increased in the US, UK and some European states during the 1970s, authoritative parenting was in the ascendency. While rising inequality may in principle have affected all parents, perceptions varied among parents as to how best to shape and influence their children’s futures. Throughout the 1980s and 1990s, cultural values associated with authoritative parenting such as hard work, respect for authority and habit formation were sustained by growing right-wing political beliefs such as resistance to redistribution of wealth. Authoritative parenting prepared children for an uncertain competitive future where upward social mobility was reduced.

Middle-class parents, in particular, resorted to an intensive strain of child rearing that found expression in the term “helicopter parenting”.

“The expression helicopter parenting is widely used to refer to the heavily involved, time-intensive, controlling child-rearing approach … the trend toward more intensive parenting is not just about supervising and protecting children but also about getting immersed in how children perform in school, which activities they pick up, and even who their friends and romantic interests are.”

Helicopter parents restrict their children’s independence and invest heavily in their education. When helicopter parented children enter the educational system the greater investment in child rearing of the middle classes is manifested in two ways. Firstly the children are better equipped to learn and secondly their parents continue to engage in helicopter parenting through investment of substantial time and money in supporting their offspring’s involvement in extracurricular activities – ranging from sports and artistic pursuits to involvement in civic projects – which have broad implications for children’s futures. They offer participants a diversified portfolio of resources: a range of cognitive skills, personality attributes and soft skills that are crucial to positive self-definition and the creation of identity capital. Extracurricular participation is an indicator for upward mobility and there is a substantial class gap in participation levels.

This book covers a lot of ground and shows how class-based child-rearing regimes are, on a global level, creating and sustaining social divisions, which consolidate damaging parenting gaps. It compares parenting strategies in different countries and examines the relationship between socio-economic systems and parenting outcomes. It makes the case for policies to curb inequality and parenting gaps through education reform – particularly investment in early years services – and financial interventions such as progressive taxation allied to positive redistribution.

The authors of this absorbing and well-argued book have laid bare the nexus between parenting decisions, economic systems and inequality. As we now know inequality has been a key determinant of Covid-19’s threat to life across the globe, thoughtful policy interventions to reset our parenting practices for a more egalitarian future are urgently required.

Colm O’Doherty is a lecturer in applied social studies, co-editor of the Irish Journal of Applied Social Studies and co-author of Learning on the Job: Parenting in Modern Ireland (Oak Tree Press)