Extracts from the summer issue of The Stinging Fly 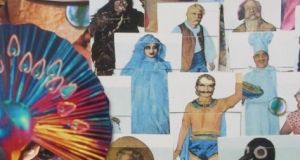 An Itch
Romanian lockdown. A bad sci-fi film. Police cars patrolling deserted streets, loudspeakers blaring: ‘Obey the military decrees! Protect your lives!’ Cheap drama-uniformed generals on TV arresting the entire populace. Nobody to leave home even for bread without a full page affidavit. One for each trip. Stupendous fines for infractions. Night-time curfew. The TV news gave the approaching plague a non-stop drumroll. All eyes on the deathometer.

Schools, businesses, parks had closed weeks before. But when I saw the grim, empty streets, I knew a dose of coronavirus was better than this experiment in mass incarceration. My 7-year-old daughter lives with me half the time, half with her mother. So one week I was occupied, the next completely alone. Over the winter I hadn’t been doing well. Let’s call it that.

I no longer enjoyed solitude, among other things. I had been getting better when the lockdown hit.

It should have been a time for the outdoors and limited socialising with close friends, but it turned out I was alone in that idea.

I don’t know what disgusted me more, the radical suspension of civil rights or the way my chickenshit friends consented to do time in their small apartments.

I walked the traffic-free streets, where the air was finally clean. The police never stopped me.

My sources of income evaporated. The military decrees were extended another month.

I developed an itch. It got worse. Scabies, I thought. I sought a dermatologist. I live fairly centrally, but the lockdown made it difficult to access medical help. Studies will be done on how many lives the various national lockdowns cost. Breakdowns, suicides, heart attacks. In the end, I had to take two buses to the edge of the city. The doctor excluded scabies. He asked if my work involved hazardous materials, then about my attitude to life. I left with a prescription for antihistamines and something he said was for my chronic insomnia. When googled, it turned out to be a tricyclic antidepressant.

That was two weeks ago. Meanwhile, it seems the lockdown has been too successful. There are too few cases. And we’ll have to stay locked down forever to keep it that way. I speak to people on the phone. Their voices are duller and more tired as the weeks pass. Everybody is broke. I still itch but I take my pills and sleep better. My attitude has improved.
Philip Ó Ceallaigh is the author of Notes From a Turkish Whorehouse (2006) and The Pleasant Light of Day (2009) and translator of For Two Thousand Years by Mihail Sebastian

Western
The guy I like was in the Tesco, at the self-checkout machine, watching me through the window. I was in the queue outside with my ex. If one person came out, I could go in by myself and talk to him. If two people came out, we would have to go in together. The guy I like hung back, waiting for me to come in. No one came out. The nice security guard apologised for the delay.

The sun was unusually hot and shone directly into my eyes. I raised my hand to my forehead to shield them.

‘It’s the back of my hand you’ll be getting,’ he said.

wrists and went back to watching the door. The guy I like came out

and I was allowed in alone.
Eva Kenny is a writer based in Dublin, Ireland. In 2018 she completed her PhD in comparative literature at Princeton University. She is working on a first book of essays and the manuscript of a scholarly monograph, Samuel Beckett and the Arts of Dispossession.

These extracts are taken from Stinging Fly’s summer issue.  Like so many publishers and publications, The Stinging Fly literary magazine is doing its best to carry on and adapt to the current situation, while continuing its mission to showcase new writers and new writing. Printing of the summer issue has been delayed until the end of June. In the meantime, a pre-publication PDF sampler has been made available to subscribers and patrons – and to new readers who decide to sign up to support the magazine. For the moment online sales and subscriptions are the only source of new income for the magazine and press. The sampler features essays, stories and poems alongside 16 specially commissioned ’Pandemic Notes from Contributors’. Eva Kenny and Philip Ó Ceallaigh both have new short stories in the summer issue. The PDF sampler of The Stinging Fly's summer issue is available to download now. The full issue of the magazine - which features new writing from Lisa McInerney, Max Porter and Wendy Erskine -  is due to be published on June 29th and both can be ordered here stingingfly.org/product/summer-2020