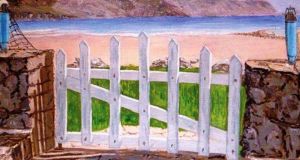 Many painters have been drawn hypnotically to Achill Island. Painting: Brigid Grealish Hunter

By her own admission, the Mayo writer Mary J Murphy has been driven by a lifelong curiosity and “inexplicable devotion” to Achill Island. Frequently she has ruminated over the connection between art and Achill, and with a fresh eye has explored its multilayered artistic life in the skilfully produced Achill Painters: An Island History (Knockma Publishing, €20). Consisting of 10 chapters, and produced in a landscape format, the wide parameters cover a period from the 1830s, when William Evans of Eton was a visitor, up to the present-day work of Camille Souter, described as “Achill’s reigning artistic monarch”.

Many painters have been drawn hypnotically to the island and the creative spirit has thrived alongside the social and cultural milieu. Apart from the usual suspects (Alexander Williams, Paul Henry, Seán Keating, Harry Kernoff), the author casts a fresh eye on lesser-known names. Overlooked female artists include the Belgian Expressionist Marie Howet, who produced 25 aquarelles, mostly on Achill; Anne Marie Bovet, from the French city of Metz; and the Drogheda-born painter Nano Reid. The longevity of the women who lived on the island is a compelling story, as well as the fact that so many were childless.

11 Boy injured after bookcase fell on him secures settlement of €80,000

12 ‘He’ll be missed’: Locals turn out to say goodbye to popular shopkeeper

13 Is owning a home a pipe-dream for the young?

14 How supermarkets trick us into buying unhealthy food, and what we can do about it

20 At home with Hilary Weston

23 It’s as if censorship were back: Why Ireland can’t watch Wild Mountain Thyme this month

24 What now for AstraZeneca and Johnson & Johnson vaccines?

27 Louis Theroux: ‘I worry about giving offence, being judged, not coming up to scratch’

28 Q&A: Where do we stand on AstraZeneca vaccine now it is restricted to over-60s?

29 Covid-19: AstraZeneca vaccine should not be given to patients under 60, Niac advises as appointments cancelled

32 Tenant promises to pay compensation after removing rafters from house

34 Mary Coughlan revisits her past: ‘It was everywhere. Bags of cocaine, champagne and tequila’

37 Up to 15,000 vaccinations cancelled today following advice on AstraZeneca jab

39 ‘Fame? If you have any personal demons, you’re quite not prepared for it’

40 Is it sensible to delay vaccines if we are at risk of a fourth wave of the virus?